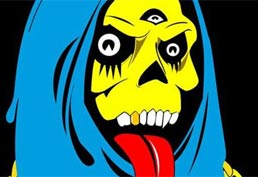 After some conversations with friends about dubstep recently, I thought I’d put up some tunes from last year to serve as a catchup/beginners guide to the genre and its surrounds. I’m by no means an expert but over the next two pages you’ll find my favourites from Burial, Zomby, Joker, Peverelist, Benga, Skream, Samiyam, Darkstar, 2000F, Joy Orbison, King Midas Sound, Kode 9, Guido and more.

Please put your own must-listens in the comments.

Enigmatic dubstepper Burial and electronic experimentaller Four Tet combined on a 12″ last year which had two tracks at 18 minutes in length total. ‘Moth’ was the standout track of the two (the other being ‘Wolf Cub’). Perfectly combining Four Tet’s ability to chop up percussion samples in inventive ways with Burial’s ability to produce some growling yet almost supernatural sub-bass.

Burial also had a couple of new tunes on the highly recommended/must-have 5: Five Years of Hyberdub compilation which also featured the tunes below from Samiyam, Darkstar (on many’s to look forward to in 2010 list) and Kode 9.

The godfather of the Hyperdub label, a music professor in his own right and the author of Sonic Warfare: Sound, Affect, and the Ecology of Fear (Technologies of Lived Abstraction), Kode 9 also released 2 EPs last year Bad/2 Bad and Black Sun/ 2 Far Gone. The former was done with LD and this is my favourite track from it.

The most ridiculous track of the last year? Why that would be 2000F’s G-funk dub almost-pisstake anthem ‘You Don’t Know What Love Is’.

Samiyam is a producer from LA who has also teamed up with Flying Lotus as FlyamSam.

For three years now, Ollie Jones has been at the forefront of dubstep as Skream. In 2009, his remix of La Roux’s ‘In For The Kill’ became a bit of an anthem, crossing boundaries and radio playlists in the UK. He also turned his superior remix hand to Bat for Lashes and Chromeo as well as releasing Skreamism vol. 5.

Skream also teamed up with his best mate Benga as Magnetic Man. An album from that partnership is expected in 2010. As for Benga, he released the Buzzin/One Million 12″ last year. He even had one of the tunes from his 2008 album picked up for use by rapper Eve on ‘Me n My’.

Skream and Benga – Trapped in a Dark Bubble

She is Danger – Hurt You

The Earlyman – ‘Malarkey’ (The Bug remix)