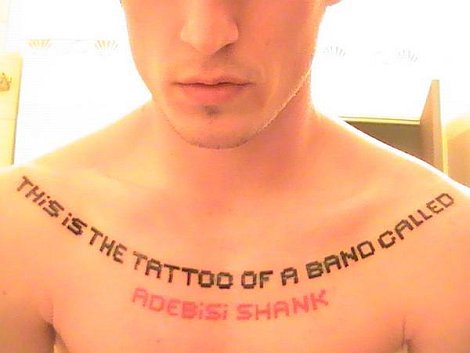 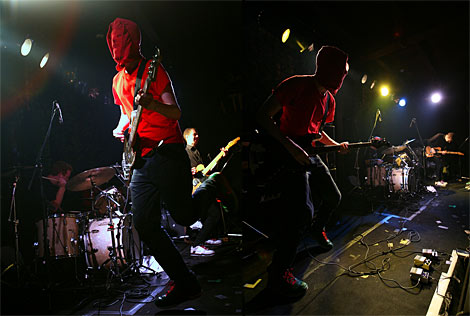 You know we’re big fans of “the Shank” around these parts. Lar, Mick and Vinny have played some of the best gigs I’ve been at in the last year and a bit and their album This is the album of a band called Adebisi Shank is now finally upon us. Recorded in Baltimore with J. Robbins during the summer, it has 8 songs and is only 23 minutes long. This band are so good that some guy from Missouri got a tattoo in their honour (Is it real?). This is how to play furious, frantic and despicably good instrumental rock music with technical skill without showing off. I hear they went down a storm on their recent Japanese tour.

The Dublin launch gig is this Friday (tomorrow, the 26th) in the New Boom Boom Room (Frasers, 34 Upper O’Connell St) with Kidd Blunt and Realistic Train at 8pm It’s €10 in with a free album (flyer). If you can’t make it, the album is available on the Richter Collective website.

If you like this, you can follow the family tree – Terrordactyl, The Vinny Club, Realistic Train and the rest of the Richter “Collective”.