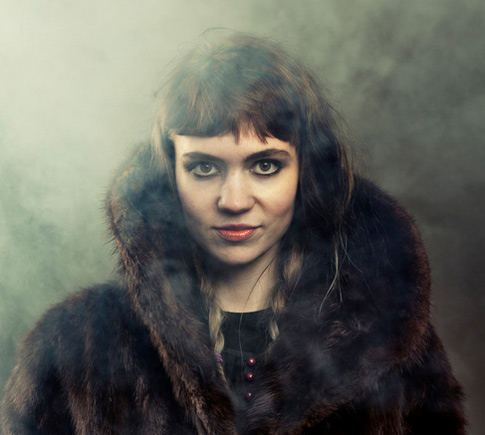 There’s no way this post or review should really exist. Two or three months ago, if the subject of Clare Boucher’s music came up I would end up talking about my bewilderment with the Canadian’s burgeoning status as the next anointed one. Yeah, Grimes was interesting, a bit quirky. A nascent talented cyberpunk who called herself ‘post-internet’ and used looped electronics live. But worthy of such ready all-round praise? Was this acclaim a natural process of a blogosphere and its readers championing an artist because she ticked all the boxes of alternative, “altered zones” hero without real merit? A race to discover the new without a care for its quality? In other words, were tastemakers chasing the buzz that disappeared up their own hole?

I stayed on the side of caution. I thought she had a lot of work to do to get to that point having briefly seen a bit of one of her sets at SXSW 2011. ‘Vanessa’ was a marked improvement on her second album Halfaxa but the breathy chorus (‘Hey hey wanna play…’) just made me feel uncomfortable in its childish coquettishness but maybe that was my problem.

So how could something I resisted and was cautious of really win me over if I’d already half made my mind up? Simple. It turns out Grimes’ third album Visions is, for starters.. REALLY. FUCKING. GOOD.


Where before Boucher had managed two lo-fi and slightly amateurish-sounding releases of scattered ethereal gloopy electronic pop, Visions has me looking at it from a simpler angle. It’s a great record, a pop album of sorts. No angles pitching it from a ‘post-internet’ dialogue was required.

Sure it’s full of weirdness and oddity, that was to be expected. It’s imbued with exotic influences or at least far flung. K-Pop has been slowly leaking out to onto the Western world of late (at least in the media) and Boucher has talked about being inspired by it. That influence is felt on that ultra-high falsetto, the high-pitched squeals, the R&B coos and the classic dance music oohs, the pervading sense of airiness through voice. It would all feel like new age nonsense if it there weren’t so many seriously catchy hooks all over the record. In a way it’s like learning slang or a new language. It takes a while to get used to and to understand its appeal but it’s a rewarding process.

While her voice is still ghostly, the music hits you with immediacy. There’s no relying on obscured melodies or floaty new age atmospheres here. The album is filled with examples of the juxtaposition of these two aesthetics. ‘Infinite ♡ Without Fulfillment’, ‘Genesis’, ‘Oblivion’ and ‘Vowels = space and time’ are just four songs built on her swirling, looping falsetto lines anchored by reverberating and robotic /malevolent and buzzing synth lines (almost 8-bit in roughness at times) and beats that bang that add the force to her weightlessness. There’s a sharp focus, a careful consideration given to each melody. It’s the sound of Boucher working the technology the way she wants it to go, not just adding technological effects to give off that impression or add atmosphere.

Considered and sharply arranged, Visions is a thrill. The aforementioned early praise was perhaps a bit premature but it can certainly be applied to this record.

Grimes’ Visions is out now on Arbutus Records/4AD in the US and on March 9th here. Grimes will play Forbidden Fruit, Primavera and Field Day amongst others later this year.

Kid A – ‘BB Bleu’ & PPPONEY: A soundtrack for an imaginary film