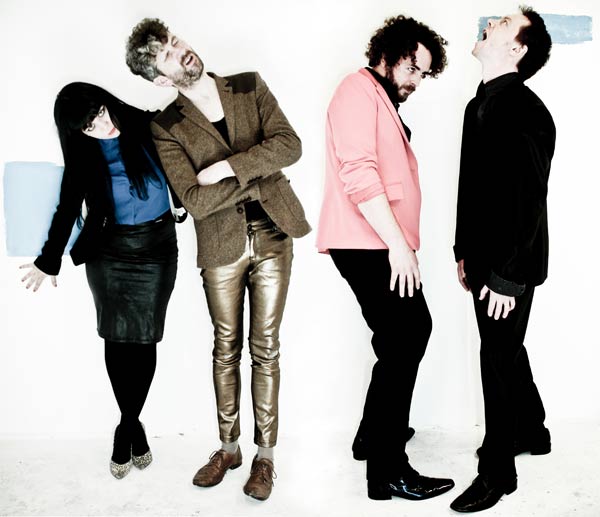 A debut album is still a marker. Of experience, of thirst, of desire, of knowledge and of aspiration. Logikparty have three years of making music as four people together. Their live gigs to date have been visceral and gut-pounding, a heady spiky kraut-punk No Wave display. Assisted late last year in London by producer Alan O’ Connell aka Alalal (producer and engineer on records from Duran Duran to The Rapture to Maximo Park), the band recorded their first album Oh Cult! and their first big milestone.

There are some some harsh, damn-creepy atmospherics at play as the title Oh Cult! suggests. Metronomic rhythms, carnie synthesizers (‘Drop City’), agitated guitar twangs and howling vocals. ‘Low Certitude Humbler’ ends in some uncanny slow motion after three minutes of serial killer frenzied stalking. But there’s plenty to get you moving elsewhere. Benni Johnson’s vocals lead the way pulling and pushing the arrangements which remain frantic and upbeat from the opener ‘Anti Omerta’ and doesn’t let up through passages of dissonance, funk, stop-start dynamics like the hurtling ‘Cave Pain Things’ and onto the ethereal eerie of ‘Dumb Glutton’, the jerky rhythms of ‘Guesse Flesch’ and the release of ‘Telescopic What’.

Logikparty have captured the crux of the band on record and have laid out the band in its brightest form.

Listen to Oh Cult!, which is out this Friday on White Plague Records. A Dublin launch takes place Saturday… full dates below.

Logikparty are playing the country this month:

The Spook of the Thirteenth Lock – ‘The Brutal Here & Now’ (video)