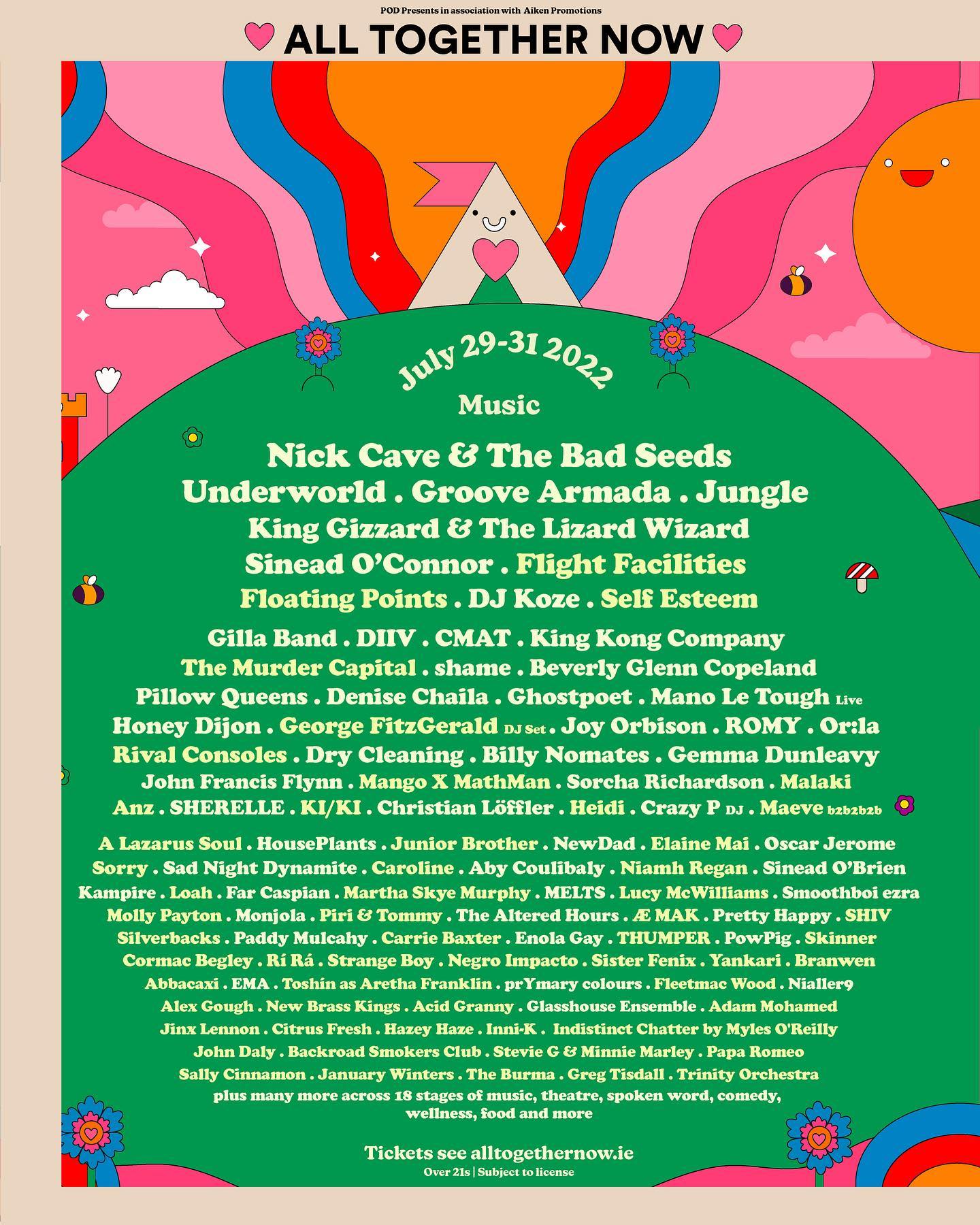 All Together Now has announced 50 more acts for the festival July 29th to to 31st, the August Bank Holiday this summer at Curraghmore, Waterford after two years off.

The festival will feature 18 stages of music, comedy, theatre, spoken word, food and more including Arcadia, Global Roots and new areas such as Ping Ping Disco, The Last City and AVA in the woods. More on the Comedy area and each area below.

Weekend camping tickets are on sale on Friday from €235, along with and Early Entry passes.

All Together Now is over 21s. Children 12 and under can attend free of charge, accompanied by a parent with a family ticket.

David O’Doherty will join us for two shows, one of which will be in our afternoon ‘Bandstand Brunch’ which has previously been hosted by Reggie Watts and Blindboy.

The dance arena will see the return of Arcadia’s signature 360-degree sound system coming to life, hosting two new components – a visceral battle between a dancing fire-breathing robotic dragon and an intergalactic bug stage. Pumping out awesome tunes turned up to 11 until the early hours, boasting an electric all-female line-up this year including Or.la, Sherelle, Anz, Ki/Ki, and Heidi expect high energy. For more see www.alltogethernow.ie/arcadia

The Global Roots area is designed and curated by the multi-talented master craftsman Christy Collard and was created especially for All Together Now in 2019. The main stage is a Greenbuild structure made of wood, utilising fallen trees in the area, in keeping with Christy’s ethos. The area continues to expand, and Christy has fantastic plans in store for 2022.  Global Root celebrates a flight-free lineup of homegrown music on this year’s Global Roots, the main stage showcasing the cultural diversity of the contemporary Irish music scene. With guests including A Lazarus Soul, Niamh Regan, Junior Brother, Loah, Rí Rá, SHIV www.alltogethernow.ie/global-roots

Performance and acts put together by Cian Austin Jesus (Lords of Strut). Music programming is supported by Eddie Kay with Brian Wallace on art design and resident DJs: Tonie Walsh and MC Gaffe. Go-Go dancing driven by the Ping Pong Girls from Paradise Cabaret. Throw your heels in the air, paint your face and ditch your preconceived ideas, this is clubbing, this is queer and it is beautifully banging! www.alltogethernow.ie/pingpong

The Sim Simma crew are delighted to be back, and for their glorious return are focusing primarily on dancing with a lineup that is a reflection of that. Their ethos is to show what dancing really means to people and how important dance is as a tool of expression, healing and joy. Musically speaking, Sim Simma always aims to present a diverse range of artists and genres that represent communities from all over the world, with a particular focus on Caribbean, African and Latin American cultures.

Bob Doyle is bringing his vision and immersive experience, The Last City, to All Together Now this summer. Through performance, discussions, and music, The Last City aims to promote the duty that every individual has to maintain a balance between the economy and the ecosystem and live in symbiosis with nature.

Plus much more to be announced over the coming weeks including AVA In The Woods, All Curious Minds, Belonging Bandstand, Wellness and much more! Stay tuned for more details on our Breathe and Bosca Beatha areas still to come…PLUS we’ll be lifting the lid on the delicious fare we’ll have on offer in our Food & Feasts area…