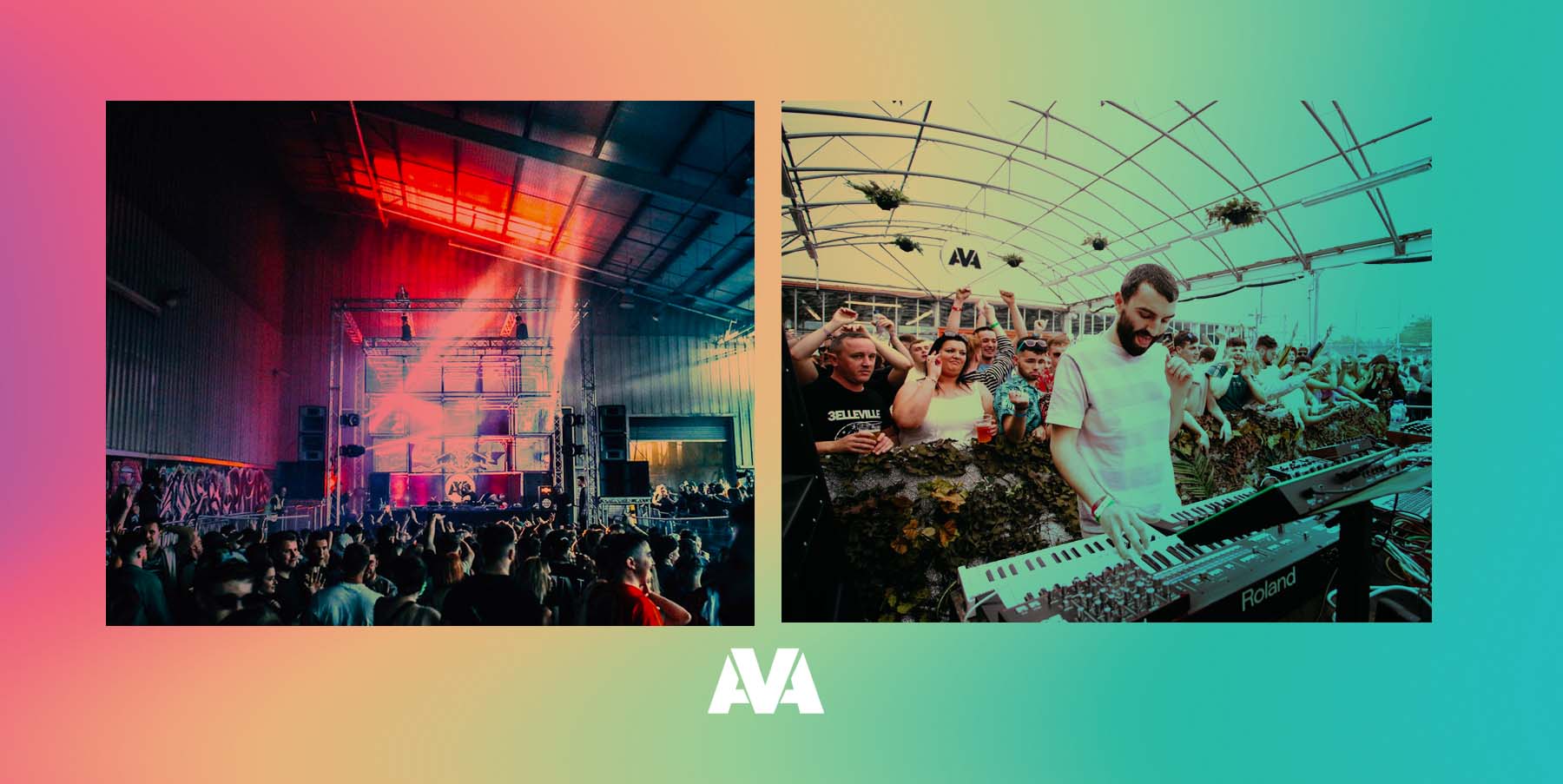 With live music in the Republic not fully returning til October 22nd and winter approaching, AVA Festival in Belfast is basically the only game in town for those who want to go to a full capacity outdoor music festival by travelling to Northern Ireland before then.

Within a short time of appearing on the scene, AVA Festival quickly established itself as one of the most discerning city-based offerings in the dance and electronic festival market.

Through its pleasing design aesthetic, emphasis on visual art (AVA stands for Audio Visual Art), the crossover of producers and DJs of well-known legends, the zeitgeist of the current established artists, emerging talent from across the spectrum of house, techno and electronic music, a partnership with Boiler Room that produced special moments from the off and a well-programmed conference element, AVA has over the short time it has existed it has grown into a well-defined festival offering.

In that time, AVA has made installations key parts of their sites, and put on special festival nights in Mumbai, Amsterdam, London, Manchester along with curation at other festivals like All Together Now.

For 2021’s edition, coming two years since the last event for obvious reasons, AVA Festival’s edition in Boucher Fields on Friday September 24th and Saturday September 25th builds on that ambition with an expanded focus on championing local talent drawing from new genres to the festival.

As noted below by past participants Marion Hawkes, R Kitt, Sunil Sharpe, and Jordan, the Belfast crowd are always ready for a party too.

Addressing the need for outdoor events head on in the time of COVID-19, AVA has moved itself site to a fully outdoor experience this year, offering more stages than ever and spaces to spend time away from the music. It’s been a long two years without festivals and AVA are doing their best to ease you back in.

So with that in mind Nialler9 thought we’d ask some of the artists we know and love already who are playing AVA this year about their past experiences to whet your appetite.

How did you find playing AVA in the past?

Each time has been a little different as there have been some cracking venues, and my last set at AVA was on the Boiler Room stage which was an intense experience but the best yet. This year i’ll be a little less stressed!

What do you think AVA does that other electronic festivals don’t?

It’s very much centered around a local core, sure the big names are the draw for the most part but the heart is definitely Irish. The team nuture and support local artists and giving them opportunities to play all over the island under the AVA banner.

What was your experience of the crowd?

I don’t think i’m alone in saying that it’s one of the most looked forward to events in our city, so when it comes round the punters are bang on form. There’s just an air of happiness and energy, and the Belfast crowd don’t need any encouragement to party!

What do you think of the Northern Irish dance and electronic scene now?

NI had started to become more musically diverse and expansive before the pandemic hit, I think it’s going to blow up big time when clubs are allowed to open, the thirst is there for it. Production wise there is a load of fresh blood pushing though so it’s actually a really exciting period in our culture.

AVA is going to be the first real big full cap show for many people in two years – what are you looking forward to?

There’s always that buzz of excitement in the run up to the festival. It’s possibly the one time where all the local djs and heads get to hang out.,so there’s that real family vibe. To be honest I’m mostly found in the green room and dipping in and out of sets.

Optimo, Kaidi Tatham, Cait & Ema are on my must see this year.

How did you find playing AVA in the past?
I’ve only played the festival proper once, in 2019 on the Boiler Room stage, and it was very very fun. The crowd is just ready, there’s no winning them over, or building it up, they’re just up for it from the get go. The expectation that people have for the experience they’re gonna have at the festival builds up in the run up, and when the festival hits, it’s ready to boil over. Which is a deadly buzz to perform to.

What do you think AVA does that other electronic festivals don’t?
There’s a level of support for Irish acts that is tangible and meaningful. I think that plays into the reason why the crowd is so ready and up for it. The DJ can feel a connection with the dancers, there’s less hierarchy, so it feels like you’re all in it together. That makes it very easy to just be like… “here we fucking go!”

What was your experience of the crowd?
Turbo. The crowd is turbo.

What do you think of the Northern Irish dance and electronic scene ?
You can see there’s a level of support and acceptance of electronic music up there that isn’t as evident in the south. This is thankfully changing, but there still seems to be more of an openness to use unusual, unique spaces for dancing for gigs in the North. It’s hard enough to put your finger on what distinguishes the scenes in different parts of the island. There are similar challenges faced by scenes in both jurisdictions in regards licensing and the interference of the state in dancing activities. Like everywhere on this island, there are amazing people making beautiful, unique music that is a product of their communities, but they’re not being facilitated by the powers that be.

AVA is going to be the first real big full cap show for many people in two years – what are you looking forward to?
The sound of lots of people together, dancing and yupping in chorus with each other, is something that I’m dying to hear again. It is surreal to be playing this gig, driving a couple of hours up the road, while there won’t be any opportunities to play similar gigs in the Republic before the end of the year, or maybe into the spring of 2022, more than likely. It’s exciting but, obviously, it’s also frustrating. As much as I’d love to be entirely positive about the gig, and I can’t wait to play it, it does feel somewhat bittersweet. We need to be able to gather and dance and celebrate again together in all parts of this island. We need a realistic plan to do so, that will allow us to do that safely. The government needs to wake up on testing and the practical logistics of running events.

How did you find playing AVA in the past?
I’ve had some real stand-out experiences of AVA over the years. About five years ago I played Boiler Room to a home crowd and it was definitely a highlight. Playing outdoors in Belfast is a great experience, as it’s not something we get to do very often, so it always feels special.

What do you think AVA does that other electronic festivals don’t?
I think it’s widely accepted that Belfast crowds are famously up-for-it from doors open, you don’t get that energy everywhere else in the world and that really makes for a special festival experience.

What was your experience of the crowd?
Rowdy, supportive and grateful that this calibre of event is now happening on their doorstep.

What do you think of the Northern Irish dance and electronic scene right now?
Despite the lack of live shows, the output and talent in the Northern Irish electronic scene is very strong. For many years we were largely ignored by a lot of mainstream dance music so it’s great to see people who have been working hard for years finally getting their props. There’s a lot of artists doing really great things on a grassroots level and a nice fusion of DIY labels, live artists and collectives contributing to a genuine, collaborative melting pot of creativity.

AVA is going to be the first real big full cap festival show for many people in two years – what are you looking forward to?
Seeing friends, drinking beer outdoors and listening to music on impeccable sound systems within taxi distance from my home!

How did you find playing AVA in the past?
Each time it has been a highlight of the year.It Is the same with some of the club gigs I’ve done for AVA too – the crowd, the crew, the family spirit at the events, it’s all very friendly. I really value and appreciate this. At a lot of gigs you don’t even really meet the organisers, it’s quite business-like, but with AVA it’s a different type of gathering. You meet Sarah’s parents at it and stuff like that, I think this is great! The best events for me involve many generations, and AVA tends to have that.

What do you think AVA does that other electronic festivals don’t?
I think that it’s ever-evolving really is the key attribute of AVA, and that there is a big commitment to education, diversity and the audio-visual possibilities. In many ways it’s been one of the leaders in Europe in recent years of this type of electronic-music festival, and not just Ireland.

What was your experience of the crowd?
You can’t really beat a Belfast crowd. I think Northern Ireland in general is hard to beat. People just get really involved. There’s a lot of smiling for a start, it’s a very honest and upfront crowd, and I thrive off that. If I have a crowd this responsive in front of me it pushes me in different ways when I play.

What do you think of the Northern Irish dance and electronic scene ?
I love it. It was very influential to me in the early days, when I was listening to various tape packs and DJ sets played up there.I think nowadays it’s facing a lot of challenges, much like down south, I guess that’s another conversation. I’m still very positive about the future though. NI punches well above its weight, musical output wise, now it just needs the venue/industry infrastructure it deserves.

AVA is going to be the first real big full cap show for many people in two years – what are you looking forward to?
Probably catching up with people I haven’t seen in ages, and playing some music that I haven’t played out before. Also, during the whole Covid thing, a new group to change NI’s nightlife “Free The Night” has emerged. I’m looking forward to seeing them all in person rather than Zoom calls!