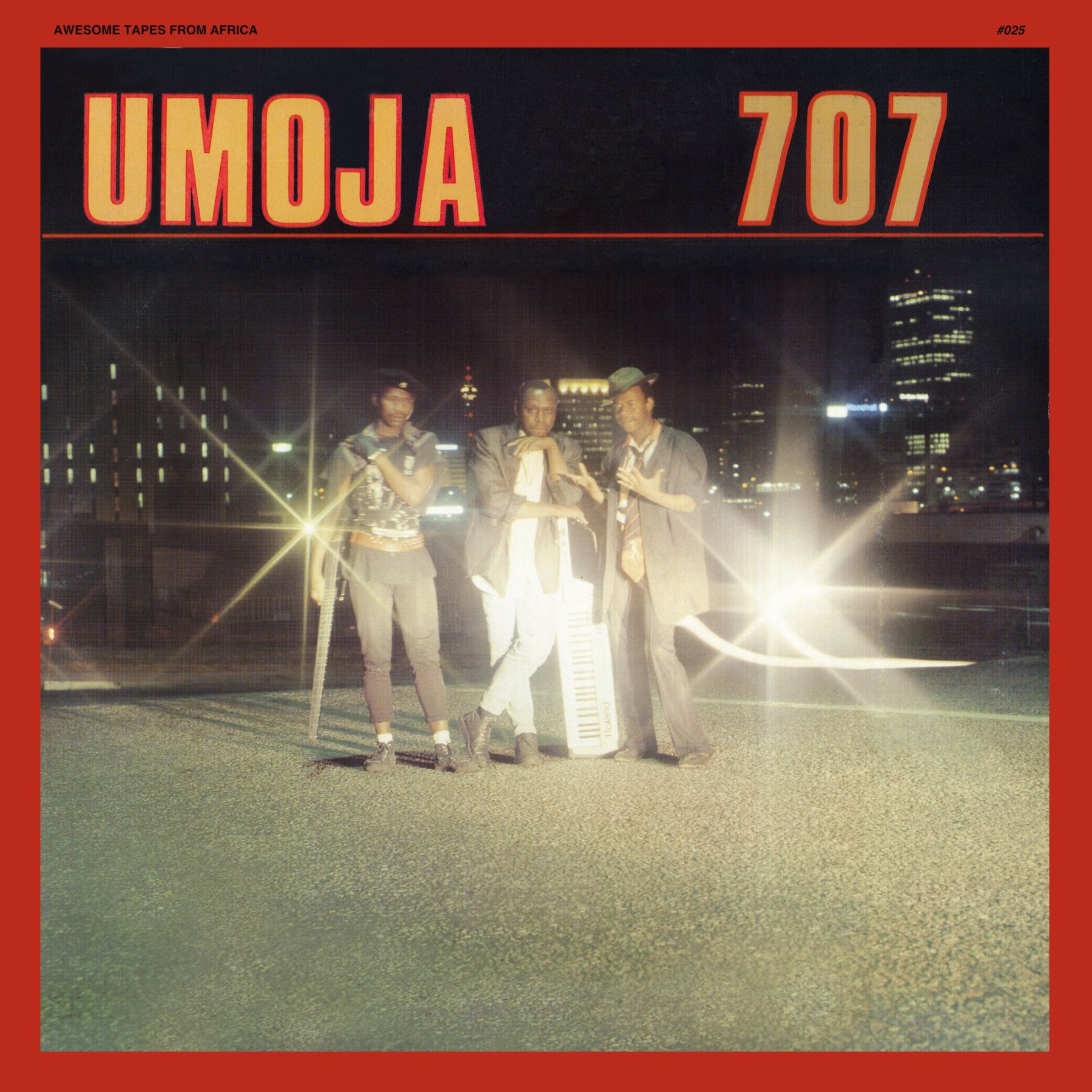 The new Amadou & Miriam song is an Afro disco banger

Awesome Tapes From Africa’s newest release has a disco pop persuasion and comes from 1988 via the artist Alec Khaoli aka Umoja.

His four-track release 707 comes out May 19th on the label. It was initially released in 1988.

Starting in 1982, Umoja recorded a succession of hugely successful recordings that reached a crescendo with 1988’s 707. Every song on the short album reached #1 on the South African pop charts and the record went double-platinum. The band changed personnel over the years but Khaoli remained producer, bass player and chief songwriter.

Check out two tracks – ‘Take Me High’ on Spotify and the video for the title track online for the first time since release with “Om” Alec Khaoli in a silver suit and a boy lusting after his teacher.

A monumental career in pop music isn’t easy when the system is built against you. But South African songwriter, producer and multi-instrumentalist “Om” Alec Khaoli managed to do just that. As apartheid reached its violent peak, Khaoli pursued an escapist form of dance music that resonated across his complicated country, influencing countless legends and releasing recordings across the world.

Khaoli first made his name as bass player in the Beaters and later Harari—both legendary, scene-defining Afro-rock and soul outfits. The Beaters played a very late-60s blend of worldly pop and folk, building a scene for creative and experimental rock made by blacks. Their affect on South African popular music cannot be exaggerated. The Beaters evolved into Harari, which played big shows across Africa in the late 1970s, from Namibia to Lesotho, Malawi and Zimbabwe. They had a deal with A&M Records in the States and their records were available in Europe and elsewhere. But it wasn’t until that group eventually birthed Umoja that Khaoli met with multi-platinum success, growing into his own as a creative production powerhouse in the synth-drenched South African pop music of the 1980s and 90s.

Starting in 1982, Umoja recorded a succession of hugely successful recordings that reached a crescendo with 1988’s 707. Every song on the short album reached #1 on the South African pop charts and the record went double-platinum. The band changed personnel over the years but Khaoli remained producer, bass player and chief songwriter. Whereas Harari was an all-star group, Umoja was an evolving manifestation of Khaoli’s creative ideas with band members working more as sidemen than collaborators.

Umoja, which means oneness or unity in Swahili, was clear in its message to the public despite the lack of expressive freedom at the time. “Oriented towards society, advocating uniting of people. Race was the big thing,” Khaoli says. “We wanted people to come together and unite and just form a oneness.” Indeed the band’s fanbase was mixed among black, colored and white fans. However, their lyrics were not overtly political. “If you wrote songs about apartheid, we would disguise them. If we used language as it was, we would get arrested.”

The band helped define a commercially powerful emergent style, bubblegum. “Bubblegum music was about escape,“ according to Khaoli. “If you had grown up in South Africa at the time, there was nothing more in your life than oppression. It was even in your dreams. Anything that was a way out was welcome… When this music was playing everyone just wanted to dance, just have a good time.”

Umoja’s music fit into bubblegum and pop/R&B playlists and received significant attention from the South African Broadcasting Corporation (SABC), the powerful broadcasting authority that helped determine the commercial success of a record. Some recordings weren’t deemed safe for airplay at all because of the strict content regulations. Songs of love and apolitical sentiment were encouraged through this system. And singing in English helped gain mass appeal in a country where almost a dozen official languages thrive.

Khaoli recalls, “I wrote a song called ‘Apartheid Must Fall’ and that album was banned by the SABC. At that time everything was on vinyl. So as you send stuff to them for airplay, they would listen to it. Then they would take a nail and then rip the record like that so it has got a big scratch and no one would be able to play it at the radio station. And then they would keep quiet and say nothing about it and no one would know about the record. But then sometimes newspapers would [find out and] write about the records and people would get curious.” Their censorship system didn’t quite work every time and sometimes music would leak out anyway.

A white South African woman named Di Burkin was their manager. “It was very helpful having a white manager and she was a very dedicated person. She was very young and really believed in our music. Di made us popular to the white people, to everyone, to all the people who were not black. But it was very difficult for her. She saw herself as one of us and she didn’t look at herself as a white person in South Africa. And we would forget that she was white too and we would be traveling with her in the black townships and when the police would see us they’d say, ‘Where are you going!?’ And she would say to the police, ‘These are my bosses.’ And the police would go crazy! ‘We are escorting you out right now!’ And so on.”

“There was apartheid in the studios as well. We used to record our albums during lunchtime at Gallo recording studios. 30 minutes or one hour was all we got. Our first album I think we did in 30 minutes. We couldn’t even do overdubs. Some of the songs were unfinished but they were released anyway, that’s what they used to do. Recording under pressure was hard. You couldn’t fix bad notes. If you wanted to go back and do overdubs, they would say, ‘Oh, you’re not a good musician, it’s your fault.’ So before a session, we would really sit down and work out how we were gonna do it. Once our albums were selling, Gallo decided to actually respect us, they started to give us more time.”

Just one recording in a career of myriad hits, 707 is a brief but compelling window into Khaoli’s significant contribution to the sound of 80s South Africa.

Hear Kendrick Lamar guest on Thundercat’s ‘Walk On By’