BD Festival is the only Good Friday BYOB festival in Ireland this Friday in Glendalough House.

The lineup includes Mylo, Dmitri In Paris, Smash Hits, R.S.A.G, Cut Once and more – stage times are above and below.

Tickets are €45 + fees on sale with bus tickets too from the BD Festival site.

You can read about the festival’s beginnings, present and future in my interview with them at the Irish Times, excerpted below. 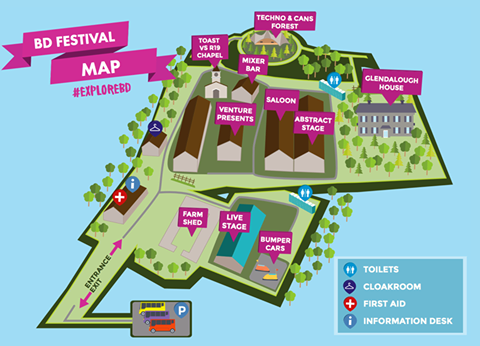 Of all the offerings on the busy music festival circuit, BD Festival stands out from the crowd for one main reason. In a time when alcohol sponsorship is integral to most festival’s plans, BD Festival takes place on a day when prohibition rules. The one-day event takes place on Good Friday, the only day of the year when drink cannot be purchased.
While BD Festival takes advantage offers a cheaper festival experience, it is also at a disadvantage, say organisers Jamie Deasy and Brian McDermott, as it means selling bar rights are not possible and sponsorship opportunities are limited, restricting growth and revenue.

“It might scare sponsors off a bit,” admits Deasy of the Good Friday BYOB festival offering. “Commercialising it with sponsors is our biggest challenge.”

“It increases the risk and also makes it harder thing to get right in terms of budgeting,” McDermott continues. “The date also changes every year, meaning we have a moving target. Next year, we’re on April 14th which could be warmer weather-wise. This year, we’re still in March so preparing for a more winter-style festival.”

The event started nine years ago as a charity gig called Barndance for 300 people on a farm in Kildare, which was kept as a secret location until the day,

“The first one was a big marquee in a field. Then we moved into the actual farm after that and had it in real barns with cowshit everywhere,” says McDermott. “We had a secret location for the early years so there’s a mystery element – you got there on the bus only.”

Initially, the festival was promoted through friends and existing contacts in Trinity College and Wesley College.
“We invited people along to a private party. Each person donated €50 to charity which meant we didn’t need a licence,” says Deasy.

“After it got to 1,000 people, the guards decided it wasn’t a private party anymore. ‘You can’t know any more than a 1,000 people’ they told us, so we started licensing it.
“In consultation with the guards, we found out about a dance licence, not the public dance licence that gigs operate with now, an old type of licence for that that allows you to put on a public dance the kind that used to happen in towns and villages.”

This year’s event, takes place on March 25th in the pre-announced venue of Glendalough House in Wicklow with an expected attendance of 4,000 people.

“Some people don’t want to get on a bus and not know where they’re going so we had to make it more accessible to the a greater number of people,” says Deasy on the decision to announce their location.

“Our last-day ticket sales are pretty low as people think if they’re not in on the secret, so they can’t go,” adds McDermott. But if they know it’s in Glendalough, then they can jump in a car and head down. It allows for spontaneity and some last-minute pull.”
BD Festival also rebranded from the Barndance name two years ago, partly to attract international acts.

“Acts weren’t too interested in playing ‘a barndance’ in a field in Ireland,” chuckles McDermott. “It’s not very glamorous for anagent sitting in a skyscraper in London to hear about that – it sounds a bit higgedly piggedly.”

After a hike in ticket price and higher-profile dance and DJ bookings including Leftfield, Fritz Kalkbrenner and Jamie Jones in recent years, the festival is now relying less on headline-grabbing talent and a lower ticket price of €40 (plus fees) which they say is working in terms of presales.

Nialler9 presents David Kitt, I Have A Tribe & more for a Musictown gig in the Co-Op, Dublin 8