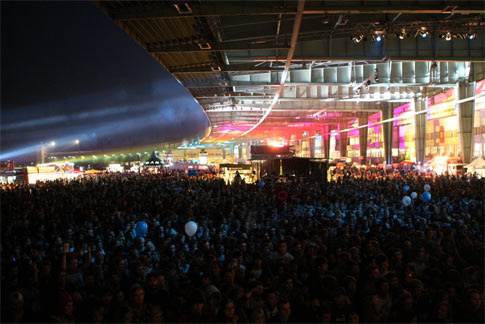 Positioning itself as a similar city festival experience as Primavera Sound in Barcelona except at the opposite end of the Summer, Berlin Music Festival took place up in Tempelhof, a former city airport superceded by Schönefeld and now, cleverly utilised as a public park and convention centre. Taking place over Friday and Saturday last weekend, the programme was reliant on the likes of LCD Soundsystem, Hot Chip, Robyn, Fever Ray and Soulwax to bring in the crowds. Weekend tickets were €70 with the added bonus of staying in a Berlin apartment or hotel.

This unique setting gives the festival itself a delicious oddness but also poses some problems too (more on that later though). Walking into the arrivals hall and you are greeted with baggage belts, classical [ref] architecture, an old-school departures board showing the timetable for the day, still standing passport control booths and the remains of Popkomm – the music industry trade show which overlapped with the festival on the Friday.


All the musical action takes place on the tarmac of the terminal, covered by a huge awning which was the first of its kind in Europe in airport terms in 1934. The main stage was positioned at one end of the curved terminal building and at either end, a hangar bookended the tarmac and provided the space for two other stages. A DJ area and a mobile disco (cleverly placed on a luggage carrier transport vehicle) provided the rest of the musical programme. Here are my highlights: 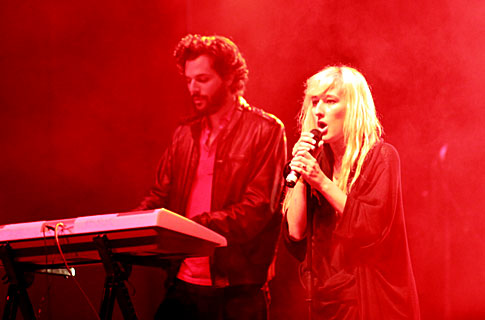 Less menacing looking in real-life and much more diminutive than her videos suggest, 21 year-old Nika Rosa Danilova flits around the stage so much it’s a bit unnerving. Flanked by two members on brooding synths and drum machines, Danilova’s performance is cathartic and always interesting. Her latest album Stridulum II has her gothic siren electronica down pat and the standouts on record are repeated here with ‘Night’ and ‘Sea Talk’ and by the time she plays ‘Manifest Destiny’, she’s in the crowd skulking around the audience. She never comes out and the mystery of where she went suits her music perfectly.

Gonzales is a bit of a hero. Enigmatic, intriguing, comedic, perhaps a bit loose-headed, Canadian, a talented pianist and with a penchant for wearing gowns on-stage, his latest album Ivory Tower is the best thing he’s done and that includes production work for Peaches, Feist, Jamie Lidell and Buck 65. A self confessed “big sweaty Jew”, his festival show is supplemented by another live pianist and two drummers, once of which is regular collaborator Mocky.

They are joined by the producer of Ivory Tower – Boys Noize on a 909 during the show. The set is as much about Gonzales’ personality as his music. He calls up a German girl from the crowd to play two notes on the piano and attempts to scare her by shaking sweat on her and screaming in her face from close range. Neither tactic works. He plays piano with his toes, covers Sting, plays a bonkers synth-squelch version of ‘Hotel California’, raps in his own distinctive pretentious style which when he delivers the wry lines in ‘I Am Europe’ reprinted below for full effect, it’s a proper festival highlight with everyone in his adopted hometown on his wavelength.

“I’m a dog shaped ashtray
I’m a shrugging moustache wearing a speedo tuxedo
I’m a movie with no plot
Written in the back seat of a piss powered taxi
I’m an imperial armpit, sweating Chianti

I’m a toilet with no seat, flushing tradition down
I’m socialist lingerie, I’m diplomatic techno
I’m gay pastry and racist cappuccino
I’m an army on holiday in a guillotine museum
I’m a painting made of hair, on a nudist beach
Eating McDonald’s
I’m a novel far too long, I’m a sentimental song
I’m a yellow tooth waltzing with wrap around shades on
Who am I? I am Europe”

Chilly Gonzales – I Am Europe 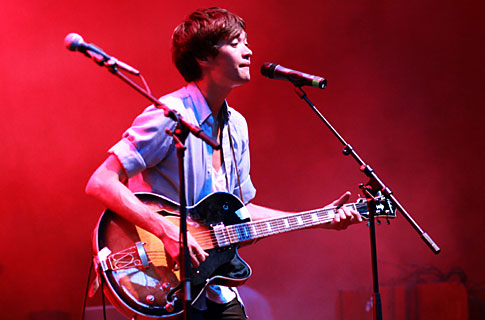 Breezy west coast ’50s inspired pop from Berkeley, The Morning Benders set is bright and nostalgic. The set, which consisted of the high-quality songs from their recent album Big Echo was a little bit rushed due to time restrictions, culminating in still their best song to date (and they know it), ‘Excuses’ with a near seven-minute version complete with acapella singalong. 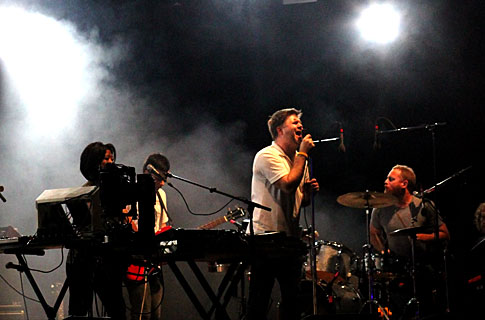 So not quite the last chance to see James Murphy and co. since they announced three Tripod dates for November but certainly, the last time to catch an hour festival set. It’s all about establishing the LCD groove and letting James Murphy and the rest of the band add layers to that so we start with ‘Us vs Them’ and then onto ‘Drunk Girls’, ‘Get Innocuous’ , ‘Daft Punk Is Playing At My House’ (actually my least favourite LCD song), great versions of ‘All My Friends’, ‘I Can Change’ and ‘Movement’ before a wig-out version of debut album favourite ‘Yeah’, all played out under their massive disco ball and a hands-in-the-air euphoria. 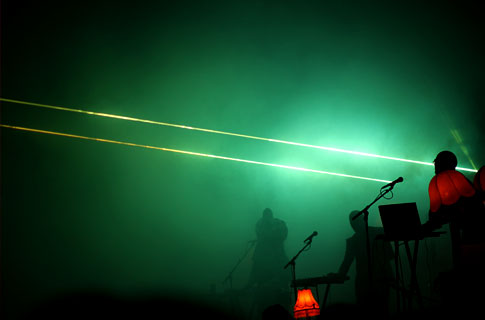 See Electric Picnic reviews from the week previous. Both exceptional shows but pretty much the same as the week before.
Fever Ray review.
Robyn review.

With the recent Love Parade trouble in Berlin, organisers of the festival had installed crowd control barriers at the entrances of each hangar which brought their own problems with Friday’s lineup cut short due to an agreement between the organisers and German police after a large crowd of people tried to get through the single-file barriers to see 2ManyDJs. It was bound to happen. No-one was injured but the Love Parade tragedy was obviously too fresh to be anything but precautious.

As a result much of Saturday’s lineup was shortened and blocked up to fit everything possible in before the midnight deadline, which is not the time you expect a festival in the notorious late-friendly Berlin to end at, but kudos to the organisers for sorting out Saturday after the problems on Friday night. Let’s hope they iron out the issues completely for next year.