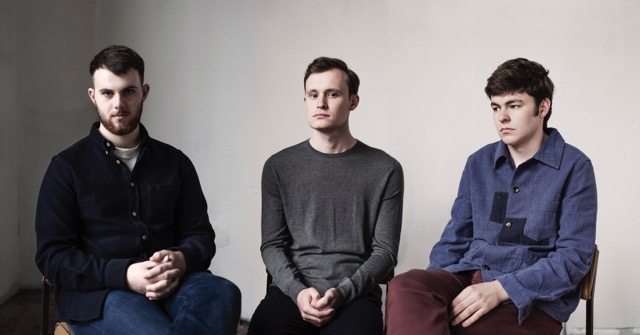 
Limerick band Bleeding Heart Pigeons have been gearing up for a debut long-playing release for a few years.

Unlikely as it may be, with long songs about school shootings with non-commercial appeal, the young trio, Michael Keating (vocals and guitar), Brendan McInerney (drums and backing vocals) and Cathal Histon (synthesizers, sampling and backing vocals) are releasing their debut album Is on Virgin/EMI on February 12th.

With the release, which was produced by the band and mixed by David Wrench (Caribou, Jape, FKA Twigs) a few weeks away, we’re hearing a more succinct version of the band on recent songs ‘A Hallucination’, ‘Anything You Want’ and now ‘O Happy, Happy, Happy’.

With each track, you can hear a clear identity developing and ‘O Happy, Happy, Happy’, like the letter posted in advance, suggests Keating seeking solace and an attempt to sate a hunger that resides within.

That letter talks of slipping a familial identity – devout Catholic, rural farmer and seeking values anew in art yet aware of despair and loneliness, the stuff we all go through from teens to adults. The album is a document of that change and a release for Keating, showing us that Bleeding Heart Pigeons may be one of the most interesting lyrically-minded bands in Ireland.