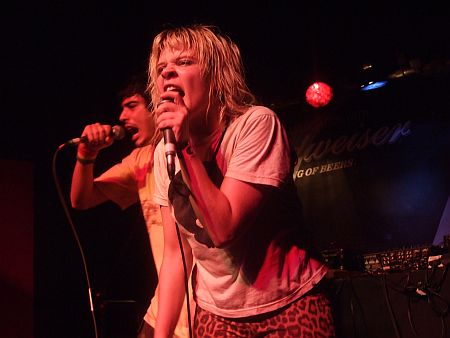 I had such a good time last night in Crawdaddy. Brazil’s Bonde do Role mix samples from rock songs with baile funk beats and were Diplo’s first signing to his MadDecent label. And you can understand why he snapped them up. Their music is pure fun, made for dancing and for putting smiles on faces.

On stage, the MC’s Marina and Pedro are backed by DJ Gorky who sometimes joins in on the MCing. Marina cavorts her way all over the stage, wrapping the microphone chord around her head, putting it down to do some aerobics dancing, stage-diving and dancing in the crowd while Pedro and Gorky keep the crowd going. The sampling of recognisable rock and pop tunes is constant with Franz Ferdinand, AC/DC, The Darkness, Daft Punk, songs from Grease, M.I.A, Spank Rock, Diplo and many others all getting a spin last night. The set culminated with myself being dragged up on the stage by Marina towards the end to scream at the audience.

It was a poorly attended gig which is unfortunate as it would have benefited from more atmosphere. In the end, it didn’t really matter though, it was the most fun I’ve had at a gig in a long time.

Check out the photos on Flickr and the video below to see what you missed.

And a couple from DJ Gorky (Bonde do Role’s DJ) – Smashing Pumpkins and Franz Ferdinand collide with Baile Funk. These are good!