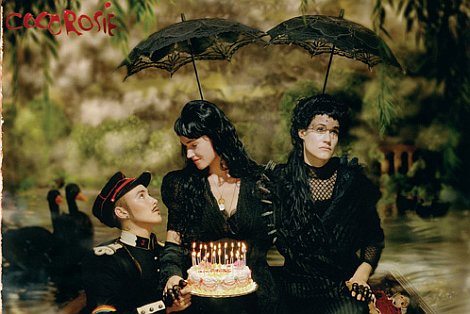 Before I listened to the new CocoRosie album, I was still undecided on the merit of their recorded work. No doubt there is are a few highlights I would return to on their second album Noah’s Ark (“K-Hole, “Noah’s Ark”, “South 2nd”) but the album overwhelming depends on your tolerance for found sounds – telephones ringing, cats meowing for example, that it seems buried beneath layers of this noise. Bianca’s Newsom-esque voice wobbles around the tracks to greet you while her sister Sierra’s operatic singing style appears sporadically. It was lo-fi and lumped in with the “freak folk” scene yet it had hip hop beats and a sense of otherworldliness beyond Banhart et al.

So now we have CocoRosie: Part III and it doesn’t look promising. Firstly an album called The Adventures of Ghosthorse & Stillborn, suggests artistic leanings on previous releases have been allowed to roam to the realm of ridiculous titles, a notion confirmed by the accompanying press release which reads:

This album is a departure from the obscured blur of stained glass rêve to a more self-exploitive memoir. Parts are dreamy and parts are savage, but, as with an opera where death represents a secret heaven, the whole record feels like a black diamond in the snow….

If Jean Genet was the muse that inspired Noah’s Ark, the spirit guide for this album was Wee Willie Winkie. A pre-pubescent idol who never changes out of his bedtime clothes, Wee Willie Winkie runs through town, upstairs and downstairs in his nightgown, knocking on the window, crying through the lock “Are the children all in bed? It’s past eight o’clock.” He might have been an O.R.W. (original rainbowarrior).

Luckily, the songs on Ghosthorse.. don’t feel as trapped by sound as on Noah’s Ark. There’s a sense of freedom to the arrangements, it feels less dense and burdened by bleeps and environmental sound. Bianca and Sierra Casady’s voices are unusual enough to sit on top of the tracks and the album’s first two tracks accentuate this – “Rainbowarrior” is an uplifting hip hop song that musically sounds like Enigma (in a good way), “Promise” is a beguiling mix of trip hop, spacey phased synth and a beautiful resonant vocal from Bianca. Another highlight on the album is the ridiculously exuberant “Japan” with lyrics like “everybody wants to go to iraq / but once they go, they dont come back /bringing peanut butter jelly and other snacks / we might have our freedom, but we’re still on crack.“.

No doubt to many their music is as beguiling to some as their back-story (re-united half-Cherokee sisters etc) and if you ignore the failed allusions to drama and grandeur, you may find a beautiful and enchanting album to indulge yourself in.