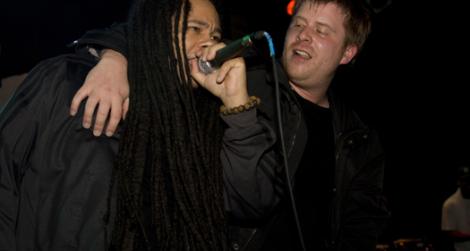 The worst kept secret in New York last week was that at Def Jux’s CMJ Showcase, Company Flow would reunite on stage. And that’s exactly what happened when EL-P was joined by Bigg Jus after his solo set to run through some Co Flo songs. DJ Mr Len was nowhere to be seen but El-P’s current DJ, Mr Dibbs helped the duo with “The Fire In Which You Burn,” “Population Control” “Vital Nerve” and “8 Steps To Perfection.” There are rumoured plans that the group will be re-uniting next year.

El-P also had another surprise guest on the night, when he was joined by Del The Funkee Homosapien.

Video of the Company Flow reunion after the jump:

Saul Williams does a Radiohead