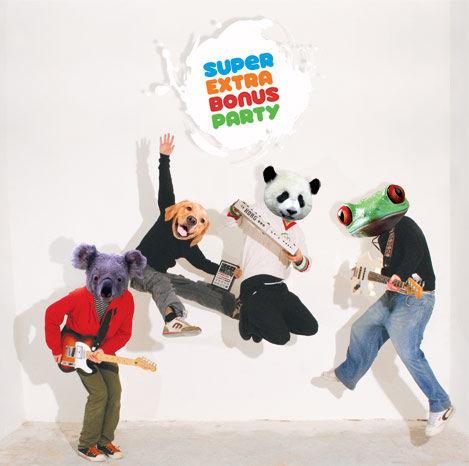 You betcha. The debut album from Super Extra Bonus Party is being released this week and is without a doubt, one of the most diverse and eclectic Irish albums of recent memory. Before I continue, a caveat: I’m best mates with the band. In fact I live with them, make their artwork and visuals and darn their socks. Mike from the band is a occasional contributor to the blog. Cries of favouritism could be levelled at me but the advantage of having an mp3 blog is that you, the reader, can judge for yourself by listening to the tunes. I genuinely believe my previous statement about the album and here’s why.

A few years ago, I had no faith in the Irish music scene. It was part ignorance and part disappointment at the lack of originality on display in music venues around the country. I’m older and wiser now, I understand there will always be rubbish bands peddling their uninspired wares. In the last year or so, I’ve come across so many Irish artists and bands that have changed my perception of Irish music. You only have to look at the recent Irish album poll on this site to understand this and look to the upcoming bands making exciting music – Nouveau Noise, Terrordactyl, Dark Room Notes, Channel One, Deep Burial, Jape, Dry County, God Is An Astronaut – the list goes on. These bands along with Super Extra Bonus Party have jettisoned my bleak outlook in Irish Music and made me excited again.

And so I turn to the Super Extra Bonus Party LP. It’s an ambitious album which takes in jump-up electronica, indie-pop belters, hip hop workouts with dabbles of ambient and heavier rock sounds. The band consists of core members Cormac & Mike (programming, blips, production) , Fatz (bass, guitars, trumpet) Gav (Guitars,drums) with occasional contributions from Brazilian MC Rodrigo and Sean (production). The album features contributions of a myriad of Irish musicians – Nina Hynes, Paul from Channel One, Kill City Defectors and human beatbox White Noise. With such a diverse lineup, the album can be hard to categorise but think of the kind of ethos that informs UNKLE’s Psyence Fiction and you’re almost there.

The album starts with “Adventures”, the trumpet-led beat which segues into a more uptempo rhythm complete with a wall of guitar riffage. The two Nina Hynes contributions are ethereal and ambient – “On the Skyline” has Nina spouting “Tastemaker / Love faker / Lion Tamer / Darth Vader / Lost Radar / I’ll see you later” while “Dorothy goes Home” is built on a delayed acoustic guitar and Nina telling us “I’m clicking my heels” a la The Wizard of Oz.

Another classic film is referred to in “Favourite Things” (Can you guess?), in which the Rodgers and Hammerstein number is fused into a bouncing hip hop song with rapid-fire Portugese raps from MC Rodrigo intercut with Julie Andrews sweet vocals. Iain from Kill City Defectors lends his snarling vocal to the electro-rock “Erosion” while Paul from Channel One contributes to “Everything Flows” , the aforemented indie-pop belter with the uber-catchy guitar riff.

Rodrigo appears again on “Son Varios” a DJ Krush-esque track as well as on “Spanik Sabotage” (which talks of Brazilian MC Sabotage and his murder in 2003). White Noise’s human beatbox contribution is breath-taking and the album finishes strongly with two more instrument based tracks – “Drone Rock” sounds like “Shoot Speed Kill Light” era Primal Scream while the album’s finale is “Propeller” is a sweet instrumental which becomes engulfed in Mogwai-esque guitars and concludes where the album started with a trumpet.

The lads will be playing two album launch gigs on Thursday (12th April) in Newbridge, Kildare in the Riverbank Arts Centre with LPX, Wolves, Marshy and Robbie Coffey. Friday (13th April) is the big one in the Voodoo Lounge in Dublin with Herv, Nouveau Noise, Terrordactyl & Thalamus. Both gigs will be €8 or €15 if you buy a copy of the album. I’ll be doing visuals at both gigs also. Looking forward to it immensely!