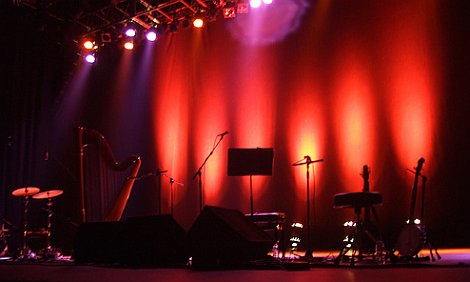 A seated performance in Dublin’s most adorned & decorated venue was a perfect setting for the 24 year old Ms. Newsom on Saturday. If the the male population in attendance had their way, that pre-nominal would be changed pretty fast such is the unflagging fervour of devotion she incites. And it’s not hard to imagine why. Arriving on stage in a striped fitted brown and white dress, a big lipstick smile and sandy ringlet hair, she greeted the crowd with such glee it’s hard not to use the word childlike. Anyhow, despite rumours of a 30 piece orchestra, Joanna was backed by 3 musicians – Percussionist, Violinist & Banjo / Guitar player collectively known as the The Ys Street Band (from her latest EP). 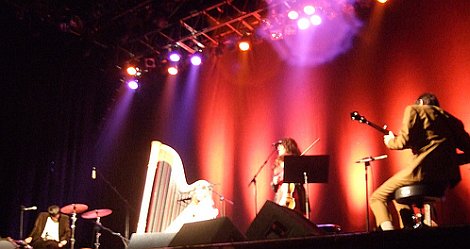 For such a large capacity venue (1000+), it was a remarkably hushed audience. The set was close to two hours and consisted of Ys in its entirety played sequentially with songs from Milky Eyed Mender scattered between the longer songs. Personally, I prefer Ys as an album, its scope is such that it makes Mender look quaint in comparison and it was these songs that sent shivers down my spine the most. Watching her pluck the harp with such studied precision from the front row was a unique experience.

Highlights of the night were plentiful – Ys’ end sequence of “Sawdust & Diamonds”, “Only Skin” & “Cosmia” was as remarkably good as I’d hoped, a slightly different version of “Peach, Plum, Pear”, her between songs awkwardness resulting in small talk (“Anybody see the bicycle kick?”) and application of glue to all-plucked out fingers meant there was time for a joke (“How many hippies does it take to screw in a lightbulb? Hippies don’t screw in lightblubs, they screw in dirty sleeping bags.”). Her voice was amazingly versatile, and she perfected every note. It was great to hear that vocal squeak her voice does throughout the night. The addition of simple percussion was also a highlight as Neal Morgan stared at Joanna for the whole set waiting for the right time to bang a drum, shake a tambourine or hit a snare. Her movements as she played the harp were captivating as she jerked her head to emphasis the words she was singing. A fantastic performance. Oh, and of course I want to marry her too.. 😉

The setlist went something like this:
Bridges & Balloons
Emily
Monkey & Bear
This Side of the Blue
Inflammatory Writ
Sawdust & Diamonds
The Book of Right On
Peach Plum Pear
Only Skin
Cosmia
Clam Crab Cockle Cowrie
Sadie

Contender for Irish album of the year?