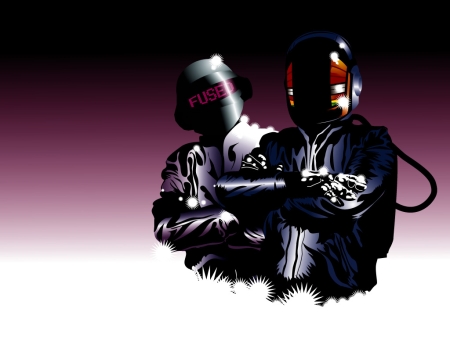 To me, Daft Punk are the most frustrating band on earth. After an amazingly promising debut and some highly inventive videos, they warmed to fashionable publications like The Face and many other media outlets and ending up becoming some shit parody of themselves. The music became watered down dance-pop. Sure, ‘One more Time’ was a top class pop tune for the masses but it lacked the energy, intensity and inventiveness of ‘Homework’ instead becoming some watered down radio-friendly pop act that meant nothing except that song that everyone danced to drunkenly in every random nightclub in Europe.

2001’s ‘Alive 97’ only confirmed this for me and many of my acquaintances. It was like Daft Punk were saying “Look, we know we’ve let you down, but listen to how good we WERE”. Their latest album ‘Human after All’ was only slight improvement on ‘Discovery’. Now, whether it be to record company obligations or a timely reminder of their one-time greatness, they are releasing a singles collection entitled ‘Musique 1: 1993 – 2005’, and it allows me the chance to post up one of my favourite songs from their back catalogue, which is also the first song on the aforemented singles collection, ‘Musique’ was their first ever single and was also the b-side to ‘Da Funk’ which I remember buying in France on a school tour in 1995 / 96. It’s still a classic.