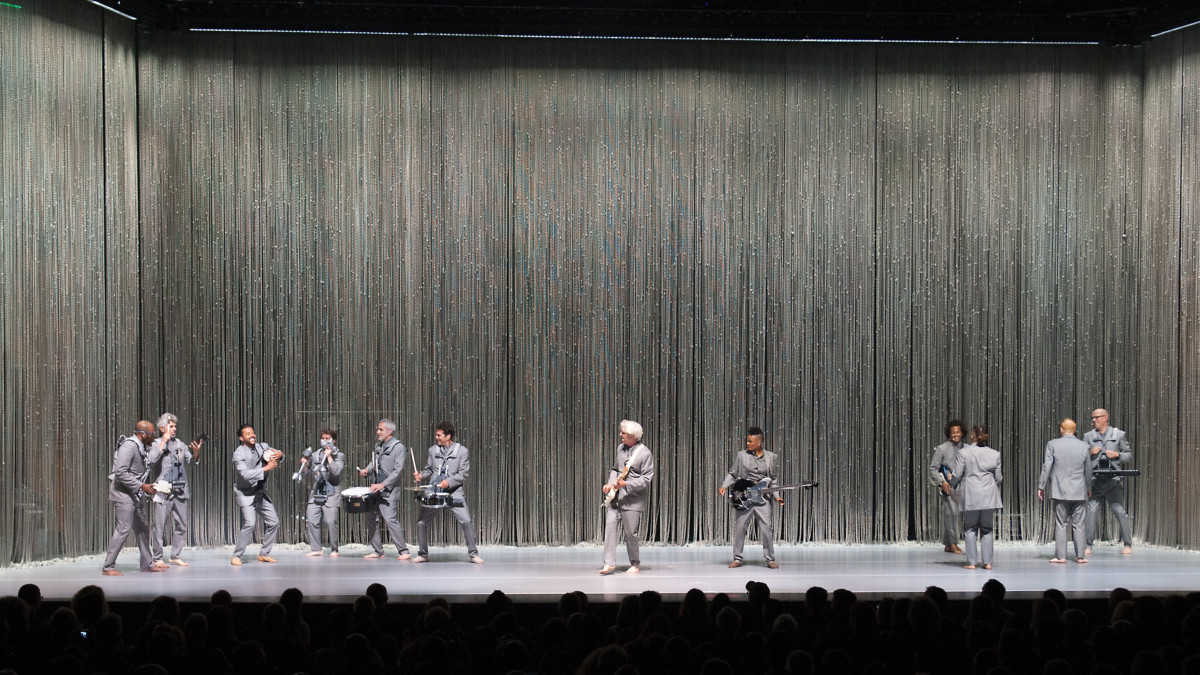 David Byrne sits alone at a desk on the stage. His Dublin show begins with the revered former Talking Heads musician positioned as a student. Except, what proceeds that introduction is the work of a master.

At 66 years-old, Byrne shows no sign of settling into a comfortable old age. With his latest solo record American Utopia, a recent creative peak of output that includes an album with St. Vincent, his must-read How Music Works book and a series of talks entitled Reasons To Be Cheerful.

What the scholar has learned he has reapplied it to his stage show. His shows with St. Vincent were precursors to the American Utopia tour and this current configuration builds on that choreography by Annie-B Parson, and theatrical vibe with a stage that strikingly doesn’t feature any amps, monitors or wires. The 12-strong barefoot band wear their instruments like a marching band while two singers and dancers flank the main performer. The radio mic bill alone for the tour must cost thousands, not to mention the laundry bill, with the show offering an hour and 45 minutes of mesmeric energetic performances with band and leader rarely out of the gray-steel-curtained drapes stage for long.

Drawing from songs from American Utopia and early surprises of Talking Heads classics ‘Slippery People’, ‘This Must Be The Place’ and ‘Once In A Lifetime’, the show last night was as much a performance of musical theatre likely to be seen on Broadway than a rock show. It makes sense that the author of How Music Works, a book where he examined the very idea of performance and music in a space, would still be questioning that vernacular, that he is still succeeding and revitalising it is a reason to be cheerful indeed.

If it didn’t totally work, it was because the songs didn’t match the stagecraft. ‘Toe Jam’, Byrne’s song with Fatboy Slim as The Brighton Port Authority still sounds like a Disney Caribbean song while American Utopia lowlight ‘Every Day Is a Miracle’ heads towards Monty Python levels of accidental melody. In anyone else’s authority, these songs would have blotted the show but Byrne’s singular vocal style and delivery keeps it just the tolerable side of kitsch.

There are so many great songs played to drown those brief issues out. ‘Everybody’s Coming to My House’, the highlight of the new record feels anthemic, ‘I Zimbra’ percussive funk is never not welcome, ‘Doing the Right Thing’ is vibrant and dramatic, ‘Bullet’ features a lampshade for dramatic effect,  and the encore songs of ‘Burning Down the House’ and ‘Road to Nowhere’ still sound vital, particularly when performed with such ensemble vitality, with the performers leaning, hopping, spiralling and dancing in unison while playing a perfectly calibrated gig.

David Byrne has never stopped engaging in art, the world and performance and it’s meant his relevance is unparalleled. As his live show in Dublin reminds us, he’s never stop trying to make sense of the world and lift the body, mind and spirit. Byrne’s evidential mastery has a lot to teach us.