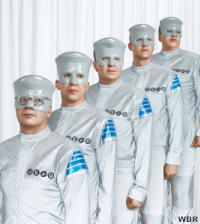 The Golden Filter to play Oxegen

Last month at SXSW, Devo conducted a live focus group to help decide what their album would be called (see the videos below). Now the band are hoping for fans to pick the 12 tracks to appear on that album out of a possible 16th in a “song study” .

“In an effort to comply with the growing need for appealing sonic products in the mass market, we have officially launched the “Devo Song Study” to collect data regarding which of our current roster of recorded material is most appealing to you, the general public.”

You can participate in the study here – http://songstudy.clubdevo.com/ or hear two great new tracks at Spinner.