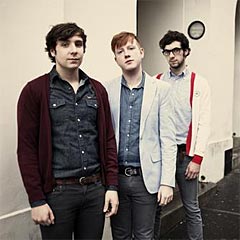 As part of the extensive Irish week last month in which I asked loads of people for Irish music they were digging, I also asked Two Door Cinema Club. Seeing as it was short notice and the lads were off supporting Phoenix and appearing on US TV show Jimmy Kimmel, I guess I can forgive them, but Sam (far left in pic) from the band got back while I was away last week and here are his picks:

They have just released their second EP called, Take Flight, Take Care which I know will be the soundtrack to our summer. Kowalski our from our hometown Bangor. To briefly some up the sound it is very fresh, summery, upbeat melodic indie music.

This band from Belfast have just finished recording their debut album with David Holmes. I always find it very hard to pigeon hole Cashier which is no bad thing but if I had to try I would describe them as a kind of lo-fi, electro, American country rock band…
Cashier No.9 – 42 West Avenue by Nialler9

For me Sixstarhotel is the reason I play in a band. They have been playing together for around ten years now I think. When we were growing up in the Belfast music scene they were a major influence and helpful friends to us. They just released their second full length album at the start of this year entitled, Tides and Tides. The album is self produced, and mixed by Brad Wood (Mewithoutyou, Placebo, Smashing Pumpkins).

Folk outfit from Belfast who’s live shows are always highly anticipated, leading to many sold out shows in the local area. They have just released their second EP, The Hollow EP which was recorded by David Clemence of Sixstarhotel. Which I think gives testimony to what the Belfast music scene is all about.

Another massively influential band from Belfast. There debut album was released on Smalltown America and they have been played countless times on Zane Lowe’s radio show. They have been touring their instrumental melodic rock relentlessly throughout Europe this year and I am confident they are going to continue to do that for a long time to come.