Friday sees the launch of You’re Only Massive and Queen Kong’s rather good collaborative mixtape Dot Dash in the Project Arts Centre. Doors are at 8pm and the show begins at 8.30pm. Admission is €12 which includes a free silver 12″ record. Oooh fancy. To further encourage you to go to the gig, YOM’s Maebh has shared this undeniably cute video of a 3 year old reciting the chorus from ‘Do A Runner’. Explanation and flyer after the jump.

Here be the original track from Dot Dash:

MP3: You’re Only Massive – Do A Runner

Says Maebh of the video:

That child is Oscar White. He is the son of Willie White. Willie White is a kind like uncle figure who runs the Project arts centre. He tells me his son was singing this song the drive down to Wexford for their summer holidays. This made me so happy I could have exploded, though I didn’t tell him it’s a song about shoplifting… 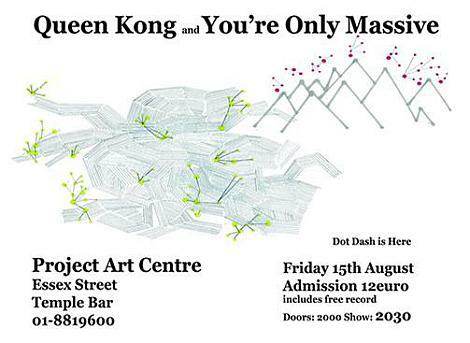