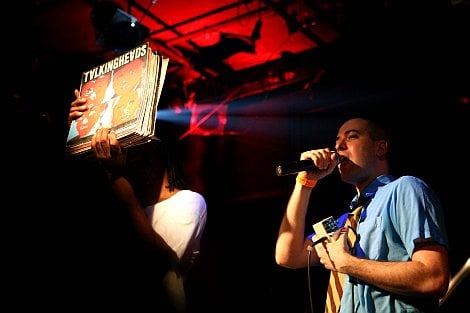 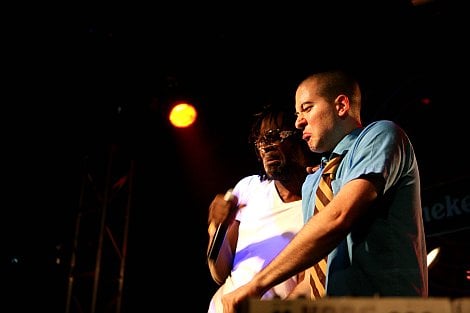 Belated Happy Paddy’s Day y’all! I spent the weekend off my tits on Guinness and recuperating from said-stout sessions in between bouts of SXSW updates and update-driven jealousy. I spent Paddy’s Day in the Guinness Storehouse for fucks sake! That place was the whirlpool of “Éire” over the weekend with shamrock-wearing tourists and pissed up Paddy booze hounds in Leprechaun hats mingling on seven floors of hops-encrusted revelry. It was actually good fun and I caught Jenny Lindfors, Ben Kritikos, Ham Sandwich and the amazing 215-piece strong Auburn University Marching Band (Amazing, I tell you! ) performing.

The big draw for me over the weekend was the Edan/Dagha show in the Tivoli Theatre. I’d heard such great things about his Crawdaddy gig in 2006 (Choice Cuts have archived the performance for your listening pleasure). 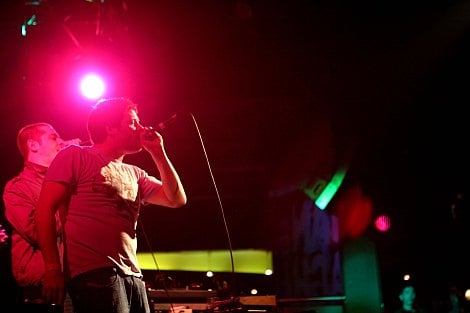 Ireland’s new hope for hip-hop group The Infomatics were warming up and previewed some material from their forthcoming (and excellent) Kill or Create album. Their tunes are quite instrumental heavy so I’m glad to see treat the live show as so, with a band consisting of drums, bass and live engineer backing the two MCs Dero and Konchus Lingo. Ooh yeh, their drummer has the suavest name going, a regular Don Juan – Jorge Laguna! Legend!

Which brings us onto the newly-shorned Edan and his compatriot Dagha. The show was a masterclass in hip-hop exchanges with the duo trading precision lines throughout. Edan dropped his acoustic guitar/kazoo combo a few times wearing an afro wig to compensate for his hair no-show. Edan held a guitar pedal for most of the set, adding synthetic effects to their voices. He demonstrated his cutting and rhyming technique, played a theremin (Well, I can’t decide if anyone actually plays a theremin or just meddles with one). Dagha gave out tulips during one of the quieter moments and held visual aids (in the form of record sleeves) for Edan’s band/album name-dropping rhyme spectacular.

Edan and Dagha with theremins and the record sleeve rhyme


And now, the gripes – in bullet form for easy digestion:

I still enjoyed the shit out of it. 🙂

Analogue were there too! 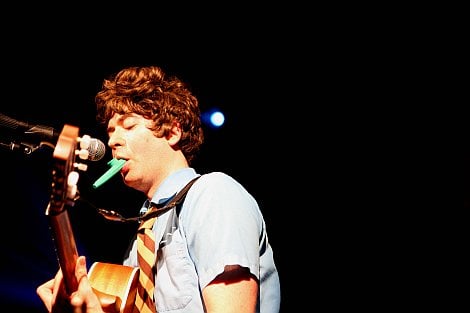 Get to the Chopper! Aagh! The Predator Rap

Video: Why? – Song of the Sad Assasin