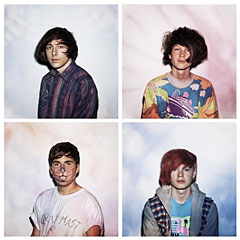 Egyptian Hip Hop are a young four-piece who are are not from Cairo and don’t make rap. Who would of thought?

Instead, the much-touted yet very young Mancunians make burgeoning…, well it’s almost too early to tell really, but you can include an impressive ability to explore synths, off-kilter guitar music and post-punk rhythms. ‘Heavenly’ is the best thing they’ve done so far but the 12 minute experimental Battles-esque collaboration with LA Priest ‘Nifeo’ is just as interesting in concept. Like with any young band worth their salt these days, the drummer has delved into remixing too by remixing fellow city-dwellers May 68 and their own tunes.

Look out for the debut single on Late of the Pier’s Zarcorp label available for Pre-Order from Pure Groove.

Introducing: The Cast of Cheers