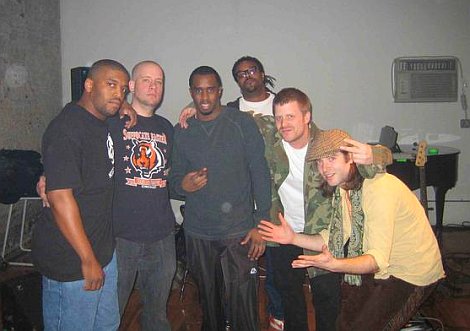 On his MySpace blog, El-P tells the story of how a picture of himself and Puff Daddy was used as the crux of a smear campaign against him by former label Rawkus Records.

So the other day me and my band took a picture with puffy. he had been in our rehearsal spot in brooklyn the entire week and we thought it would be something we would regret if we had missed the chance to get a flic with dude. this is for many reasons. there are the obvious points of irony (el-p and puffy in the same room together!?!?!?! but how? why?), as well as the fact that he is simply one of the most famous people in the world. so we went in to the hall and asked him if he would take a picture with us.

And the ensuing smear campaign:

so these motherfuckers take the picture that was taken with my camera and post it up on their site with a news piece entitled something to the effect of: “company flows el-p and puffy?” that’s it. as though the picture is some sort of statement about me. as though the picture is proof of me “selling out”. then they have one of their staff members go around to various message boards like OKAYPLAYER and the post about it in any and every post about my new album. oh yeah? you like the el-p record? check out this picture of him and puffy! oh word? you think el is a dope producer? check out this picture of him and puffy!

i would sooner spend an eternity hanging with puffy than involve myself with the douche bags behind rawkus, be it the old one or the “new” one. as far as im concerned you can keep that picture up there forever. please do. that one moment was more entertaining and fun and genuine than the enitre sum of our business relationship.

The photo is down from the Rawkus site now. Sounds like dirty not to mention pathetic tactics. Anyway, El-P will be in Dublin in little over a month and he is bringing a live band as you might have gathered. Here you can see a live version of “The Overly Dramatic Truth” off the new album recorded live at the Plug Awards.