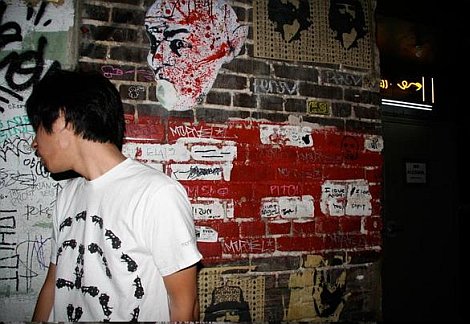 Nosaj Thing is an producer from Los Angeles who has been making music from his bedroom since he was 14. He says he’s an aspiring electronic musican but judging from the quality and depth of the tunes he has shared with us here, he’s already quite an accomplished one. Having already played shows with Daedelus, Sixtoo, Eliot Lipp, Edit, Thavius Beck, and D-styles, clearly I’m not the only one who thinks so.

Taking Eliot Lipp as a reference point, Nosaj (real name Jason) makes funky groove-driven electronica but harder and more modular than Lipp. “Heart Entire” and the Live set below illustrate this, with some of the live set sounding like Lipp put through the Justice blender. Simple, effective and totally danceable. Nosaj also has a softer side as demonstrated on “Aquarium” – a beautiful chiming instrumental with backwards synths, subtle guitar and cut-up vocal patterns.

So far, he has a self-released EP under his belt entitled Views/Octopus, with 2007 promising a Nosaj Thing full length and a couple of remixes including one for, wait for it – ELIOT LIPP! He’s definitely one to watch kids.

You can buy the EP at Turntable Lab, iTunes and through Paypal. Head on over to his MySpace where you can hear another tune called “Distro”.