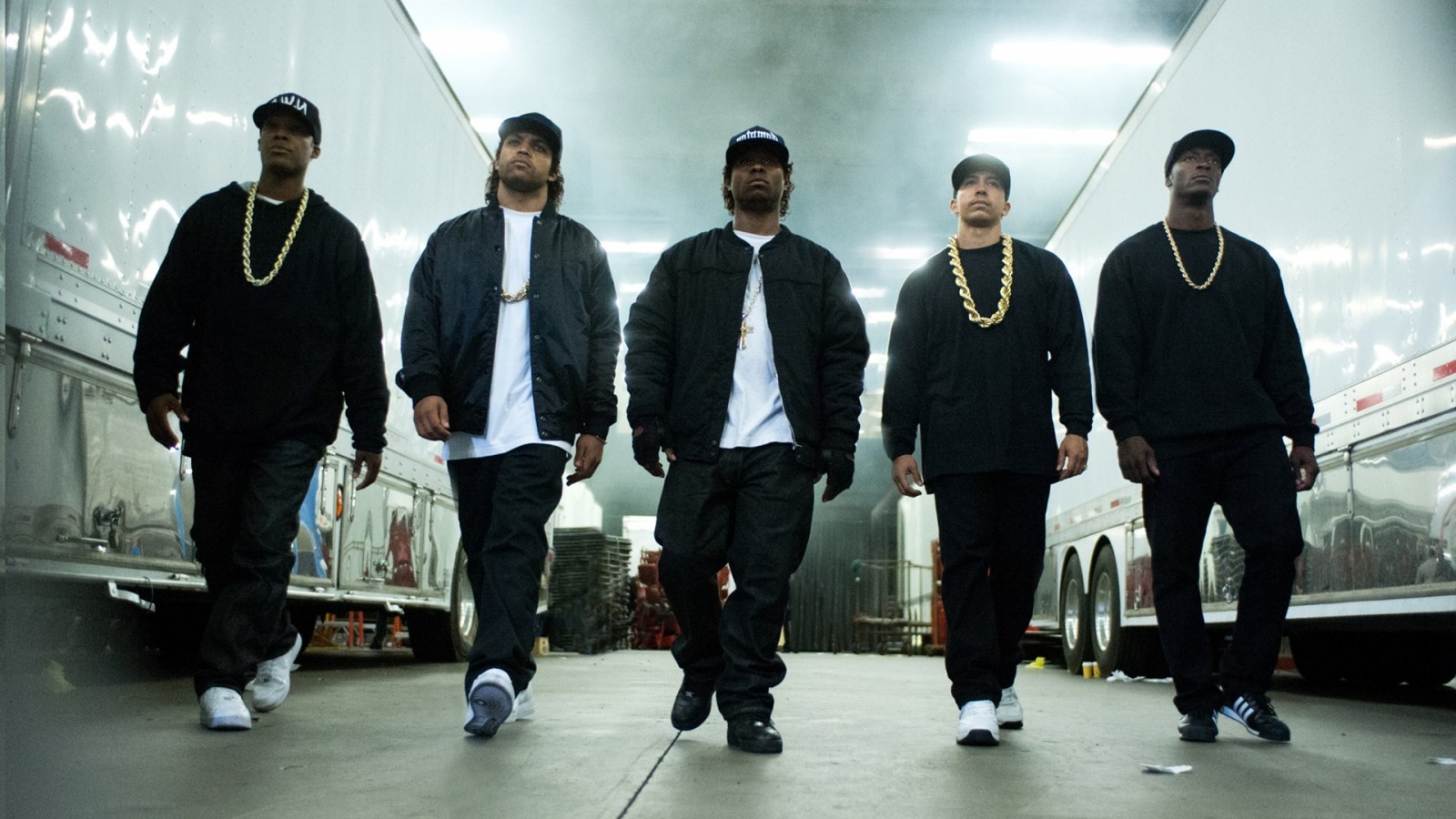 There were a few NWA songs on one of the first primer rap cassettes I received from a schoolmate in 1998: ‘Straight Outta Compton’, ‘Fuck Tha Police’ and ‘Gangsta Gangsta’. To a Kildare Christian Brother schoolgoing 16 year-old, their narratives filled with gats, AK-47s, bitches, dirty-ass hos, penitentiaries, homicide and jackings were a vicarious thrill.

The songs were enthralling and dangerous-sounding but it was hard to tell if their songs were braggadocious fantasy or articulating genuine rage and frustration such was the bombastic delivery of the music. It certainly had shock value and they clearly advocated rebellion against all else. They pushed their lyrics further over the explicit line that no one else had dared dreamed. It was exaggerated but there were elements of truth, mostly about police brutality.

Straight Outta Compton, the new NWA biopic puts the backstory into the beat and draws from interviews with those involved (it closely echoes the VH1 documentary). The film shows how Eazy-E, Ice Cube, Dr. Dre, DJ Yella and MC Ren went used their street knowledge to become pop superstars/villains. What we get is an entertaining and well-shot if sanitised retelling of “the world’s most dangerous group.”, from the early days in Compton right up to the time of mansions too big for egos already outsized with thoroughly believable casting of Eazy-E (Jason Mitchell), Ren (Aldis Hodge) and Ice Cube (played by his own son O’Shea Jackson, Jr) and Dre (Corey Hawkins).

You’ve been here before in many other biopics: the idealistic early plans, the bustups, the industry interference, contractual smokescreen, the hammy friends forever speech, tragedy, the party and bullshit. There are nice touches among it: shots of the label of records they’re playing with (Dre scratching Hashim’s Al-Naafiys is one), the humourous transformation of Eazy-E from drug dealer to rapper recording ‘Boys In The Hood’ in the studio after New York rappers HBO walked out refusing to rap Cube’s LA-centric street words, the presence of Snoop and Tupac and dangerous Suge Knight’s coercion and intimidation in business.

Eazy-E’s label partnership with manager Jerry Heller as Ruthless Records is central to the movie. That relationship would go on to disintegrate the group and is a main theme in the movie. But there are more interesting context given to the backstory. The scenes where the group get harassed by White cops outside Heller’s studio leads to Ice Cube penning their politically charged manifesto Fuck ‘Tha Police’. Naturally, the police are particularly villainous figures; pouncing on a young Cube carrying his rhyme pad outside his house, arresting youths with little reason.

Against charges of glamourising violence and crime, ‘Fuck Tha Police’ NWA claimed, was free speech, and a reflection of the reality on the streets in Compton. The Rodney King trial, when four police officers excessively beat the man after a high-speed chase in 1991 and were caught on camera, only to be acquitted, ended up being a vindication of their words and the lack of charges of the officers, which incited the LA Riots, highlighted around the world, the injustice regularly done to the black people of America.

Of course, things haven’t changed that much with recent excessive incidents: the shooting of Michael Brown in Ferguson, Walter Scott in South Carolina, the choking of Eric Garner in New York and the death of Freddie Gray in Baltimore just show how the tension that gave rise to gangsta rap in LA is still prevalent across the US, giving the movie a link in the present.

NWA knew had to use ‘Fuck Tha Police’ to their own advantage. On tour in Detroit in 1989, when after an FBI warning, the group refused to bow to demands not to play it. The song went off, the cops moved in, the group fled, to be later arrested, their notoriety assured.

Perhaps the most stark contrast between the time of the film and the present, were the early characteristics that defined these famous rappers. Dre spends the film lacking business acumen, now the Beats man is the most successful rapper and mogul who just released his first album in 16 years, to cement his legacy on the movie’s release and has spent the last number of years pimping Kendrick Lamar as his Compton successor. Ice Cube has gone from politically-charged cultural activist to playing central roles in comedic and family films. Eazy’s flagrant treatment of women would be his downfall. Ren stuck to the music while Yella went on to produce porn.

NWA’s music and behaviour was largely, indefensible. In the film, there is much misogyny played for laughs in hotel rooms and parties around women. There is no suggestion of the violent behaviour Dre last week belatedly addressed.

For a group claiming to reflect reality, there was some removed in the movie to paint NWA in a better light.