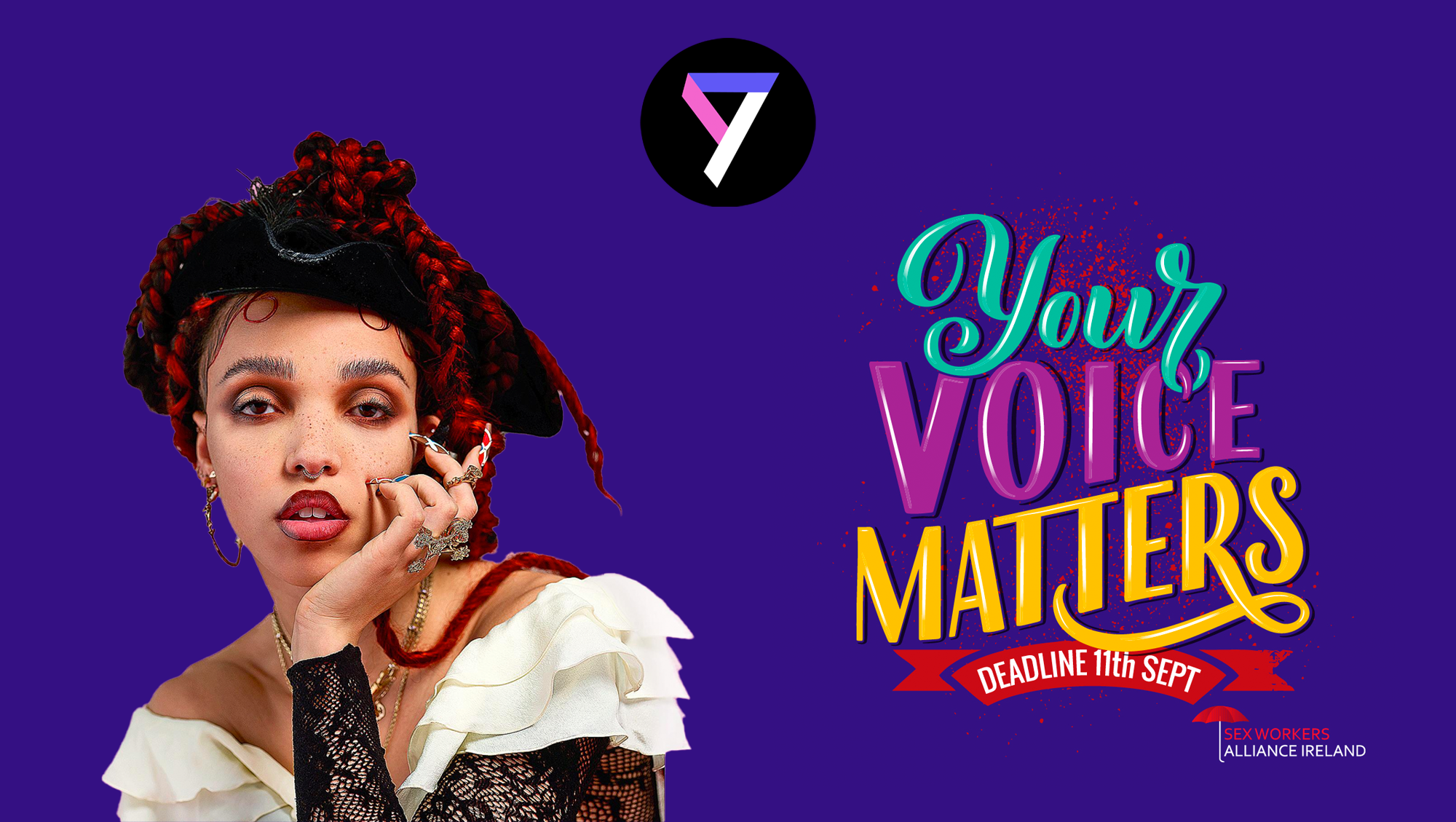 The ‘Cellophane’ singer recounted her experience as a hostess in a gentleman’s club on her Instagram before stating that it is now “time for me to step forward, pay respect, and shine a light on the challenges facing sex workers, especially during these uncertain times”. She kick-started the fund with £10,000 and is now collecting further donations on GoFundMe here.

The Sex Worker Mutual Aid Fund is going directly to Lysistrata, SWARM and East London Strippers Collective – three organisations that respectively provide financial support to marginalized sex workers, advocate for sex workers’ rights and challenge working conditions for strippers in London and the UK. The pandemic has left many sex workers in an uncertain position and, as FKA Twigs states “their income has been wiped out by the lockdown and many are invisible to the financial aid available to others”.

Closer to home, FKA Twigs’ Twitter was last night taken over by Sex Workers Alliance Ireland (SWAI), an organisation that strives to give sex workers a voice and promotes their rights and representation across Ireland.

SWAI are currently advocating for Irish sex workers within the present review of Part 4 of the Criminal Law (Sexual Offences) Act 2017 that is being carried out by solicitor Maura Butler. The 2017 act, which is based on the ‘Nordic model’ criminalised the purchase of sex but not the selling of sex. The selling of sex is still prohibited however by ‘brothels’ which the law states is more than one person doing sex work under the same roof.

Whilst presented politically as a more progressive way of combatting sex trafficking and supporting vulnerable people, sex worker organisations such as SWAI have strongly recommended against the act. “The laws in Ireland governing the selling of sex changed in Feb 2017 to make the purchase of sex illegal. It also increased the penalties for sex workers for working together and doubled the jail sentence.” says SWAI Communications Offficer, Linda Kavanagh. “This type of law is called the Nordic or Swedish model and is rooted in racism and anti-migrant stance. It was created as a reaction to prejudice at seeing migrant street sex workers specifically and considering them a public nuisance.”

Sex workers’ voice were largely ignored and typically are when it comes to legal changes that regulate the industry. “When this law was debated the committee did not listen to the concerns of SWAI and only listened to a handful of workers. Currently working sex workers were sidelined in favour of ideology.” Kavanagh says. “Male sex workers are ignored entirely in conversation about sex work”.

This lack of input from the people who understand the practical experience of sex work the most – active sex workers – has resulted in laws that simply put sex workers in more danger at the hands of not just clients but also of the state. “We don’t get the benefit of decriminalisation of sex work if part of the transaction is still criminalised. This means that sex work exists in a legal grey area which makes sex workers who have been victims of a crime reluctant to report to the Gardaí.”

“Workers are worried that they will be surveilled and their clients arrested. In reality, a handful of clients were arrested when approximately 50 sex workers have been prosecuted. Criminalising parts of sex work distances us from Gardaí, thereby losing us as the best-placed actors on the ground in the fight against trafficking, exploitation and violence”.

“The ideology behind the law is to End Demand of sex work. It conflates all sex work with exploitation and trafficking but does not address the root causes of both; namely lack of other options. Sex work is an economic activity and sometimes a bad option is still an option. Sex work can be a means of survival. This law has not empowered sex workers but has lead to increased nervousness on the part of the client. What the law has done in reality is drive away decent clients and made working together for safety illegal. The fewer clients, the more likely that workers will be forced to take on clients they would have normally turned down or increase risk taking to earn money to survive” explains Kavanagh.

This serves only to worsen the experience of sex workers despite lawmakers’ insistence that they are protecting vulnerable people. The practical outcome of the act has been “felt by migrant sex workers who are being profiled by the Gardaí. Migrant sex workers are faced with choice of leaving the country or being prosecuted, even when there is no coercion involved. Two migrant workers were sentenced to jail in 2019 even when the judge acknowledged that there was no exploitation involved.”

Kavanagh says that Gardai using “the presence of condoms as evidence that sex work has been purchased” is affecting the safety of sex workers and “flies in the face of any HIV prevention scheme” whilst “street workers report harassment from Gardaí despite sex street work being decriminalised.”

There is room for change however as Ireland undergoes a review of the act. This review gives Irish lawmakers the opportunity to draft sex work legislation that is informed by sex workers and not out-dated exclusion tactics. We have an opportunity to push for change and to protect sex workers by preventing legal marginalisation that directly harms them on a daily basis.

“We are hoping that the review will centre the voices of sex workers working under the law, after all, we are the experts! We are fighting for the full decriminalisation of the law so that sex work is no longer solely dealt with by the Gardaí.” says Kavanagh of the potential review outcomes.

“Trafficking, coercion into sex work and organised crime would, of course, all remain illegal. We need laws that are based in reality, ones that centre the most marginalised. No one wants to remove exploitation in the sex industry in Ireland more than currently working sex workers.”

SWAI’s Tips On How To Support Sex Workers