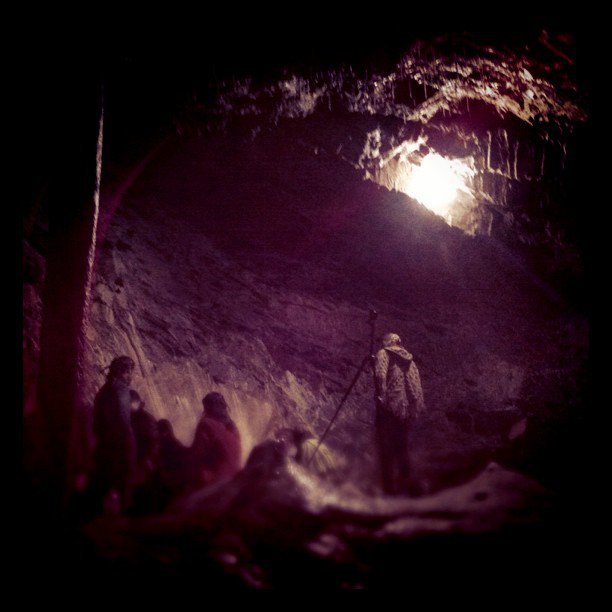 It’s not often you get the opportunity to experience live music at 200 feet below ground level in a cave so I took the opportunity to attend one of The Cave gigs featuring James Vincent McMorrow, Lisa Hannigan and Caoimhín Ó Raghallaigh performing in Mitchelstown Cave over the weekend.

The cave was discovered in 1833 by Michael Condon when he dropped his crowbar into a crevice while quarrying for limestone. Condon’s crowbar had slipped between rock and after moving some boulders in an attempt to get it back, he found the cave and its many chambers and passages. Totalling 3km in total,candlelight tours of the cave ran for 100 years until 1972 when the Condon family who own the land installed electricity inside it. Steps were installed seven years earlier. It was the first cave in Ireland to be set up for public visits.

Back in the present, it’s now run by family member John English but the family haven’t let things get too out of hand. Beyond their country house, only some outdoor toilets and a ticket stand signify this is no ordinary home. On a fine summer night, At the back of the estate, the limited capacity of around 100 people gathered outside the cave at 7pm. Groups of 10 or so at a time were led down the steep 88 steps into the subterranean space. One kilometer through damp yet lively underground passages and we found ourselves in a large cavern where the concert took place. Apparently, it’s not even the biggest of its kind – there is another three times its size much further in.

We are seated on a plateau two levels below where the performers played. After a few minutes of sitting down, the temperature, which was constant at 12 degrees, made itself known in your bones. It helps to wrap up warm if you’re going to spend two hours sitting in a cave. Once the music starts, the temperature was only a niggling concern.

Lisa Hannigan kicked things off musically with a solo set of new material. A couple of songs in particular stood out, one which talks of the months of “May and June” and another which uses places on a US tour as reference points for a larger elegantly told theme. One song could probably do with a rewrite, being that the chorus consists of the words – “safe travels / don’t die / don’t die” but it’s a trivial matter. Hannigan’s voice has only improved and in the dynamics of the cave, her range reverberated around a space which offers plenty of visual candy.

Those stalagmites, stalagtites, columns, damp eroded stone and soft rock, were eyeballed in detail during Caoimhín O’Raghallaigh’s set of experimental fiddle music. Caoimhín introduced us to a few different types of fiddles over the course of a half hour, each of them were used to experiment with melody and sound. Notes were left hanging in the cave for long moments as the eyes wandered around the beautiful natural underground amphitheatre. O’Raghallaigh’s idea was to play with the space, and there was no better place for it. A rustle of paper, the wipe of a coat sleeve or a chair creaking was audible for all present to hear while we were settled. These atmospheric sounds became part of the performances.

Having missed the chance to see James Vincent McMorrow perform in a church in Dublin earlier in the year, I figured a cave might actually be a better option. McMorrow clearly revelled in the environment and his solo set drew from his debut album Early In The Morning, with a couple of welcome surprises: a cover of Mark Kozelek’s ‘Like The River’ and a rare live rendition of the brilliant, and my personal favourite ‘Red Dust’ . McMorrow was the only musician on the night to forgo the speakers for a song and sing without amplification (admittedly not much power was required due to the acoustics of the cavern). Although the coldness became an all-consuming concern, his rendition of ‘If I Had A Boat’ unaided which saw him almost crack his voice after a long night in Galway the night before was the night’s only true aural test of the surroundings. The night came to a wonderful conclusion with McMorrow, Hannigan and O’Raghallaigh covering ‘Blue Moon’ in a perfect amalgamation of all the talent that had gone before.

Special thanks to Mary Hickson of the Cork Opera House for organising the whole thing, Kathy Scott for getting me in and especially, The English family for allowing 100 or so strangers onto their land for a unique and rare occasion. Myles O’Reilly was present to shoot the whole thing – that will be something to look forward to. In the meantime, my only regrets were not bring my Canon camera with me and not bringing another layer of clothing.

Listen to Caroline Hennessy’s piece on The Cave from Lyric FM.

The Middle East split up: “I’d rather go hungry.”