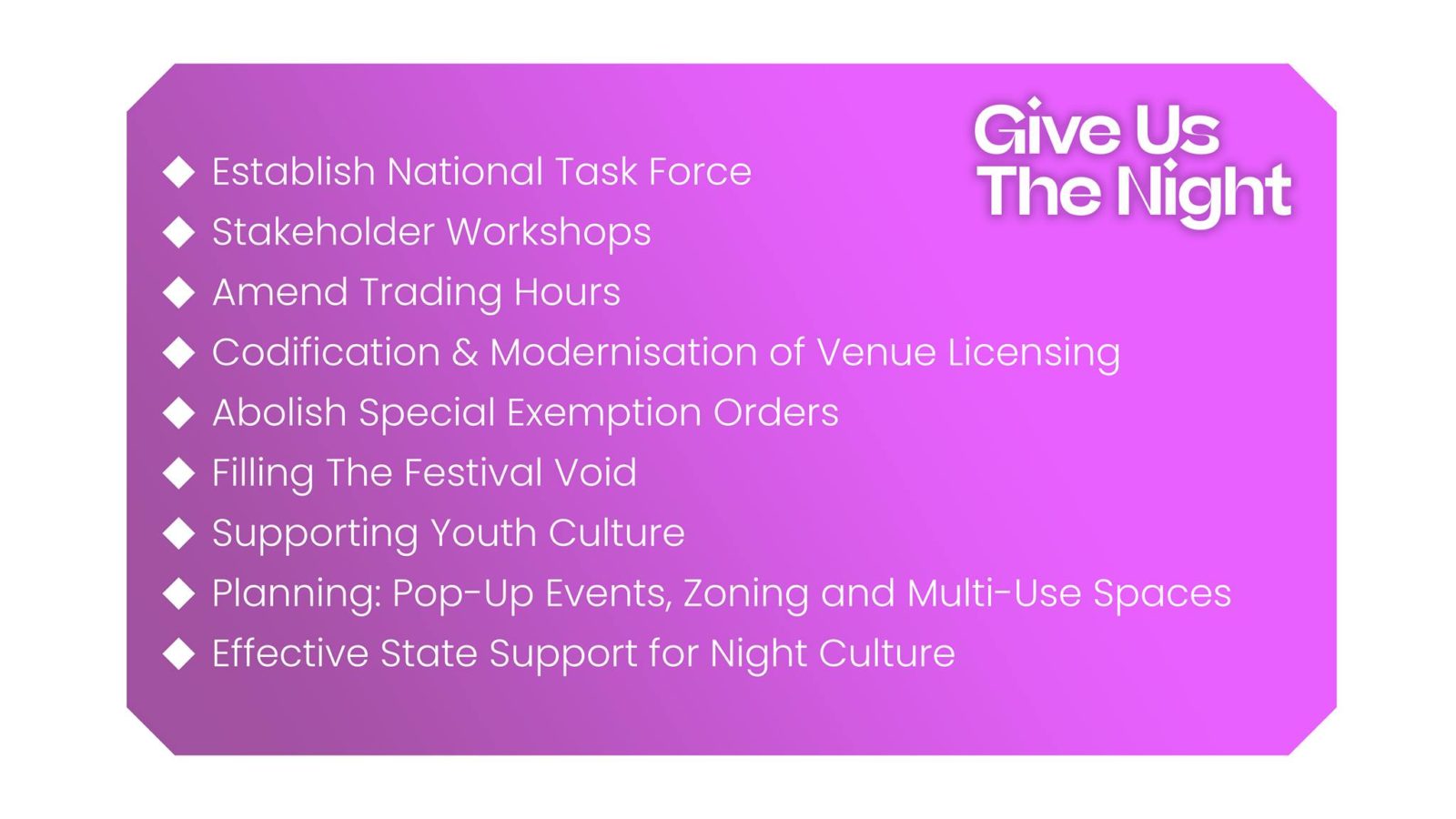 Give Us The Night’s campaign for the improvement of Irish nightlife and the easing of restrictions around licensing for clubs, live spaces and cultural events, has the opportunity to become a part of the rejuvenation of what will be required now that everything has changed for arts and culture in Ireland in the wake of COVID-19.

No part of the industry involved in live events is immune to the effects – some still unforeseen and unknown that are currently affecting venues, pubs, bar staff, scecurity, promoters, backstage staff, DJs, bands, arts organisations and even your humble music outlet.

So with that in mind, Give Us The Night have released new 9-point plan that they are calling for the government to implement once restrictions are lifted and where possible, in order to help bring some life and work back into this ailing industry.

GUTN have released a PDF outlined and detailing all nine points which you can read in full here, but the points are:

A government taskforce to be established immediately to address short-term economic recovery and strengthens the industry as it steps into a different era. Work would involve trialing ideas by industry stakeholders in order to rejuvenate the industry.

City and county councils to host online workshops with stakeholders and relevant officials in order to draft separate report of recommendations and reforms for city and rural areas for the National Taskforce to consider.

Due to the limitations for the number of people allowed to gather while practising social distancing, amend business hours to allow for longer openings to facilitate both staff and consumers alike, increasing economic possibilities and eventually to implement staggered closing times and flexible models for business to set their own times, and allow licensing to be managed by local authorities.

4. Codification and Modernisation of Venue Licensing

The creation of new types of licenses to allow spaces to operate at full cultural and entertainment potential (including casual dining / restaurants). The 1935 Public Dance Halls Act should be replaced in order to allow for this.

Abolish the costly and prohibitive €410 nightly expense for venues who wish to operate on late license hours to encourage more night-time business opportunities. Charging venues archaic fees to just open doors when they will possibly be closed for six months at least is not going to help economic recovery and only adds to the barriers for live entertainment facilitation.

With large-scale festivals the last events to be allowed to take place in the current crisis and all pretty much postponed until 2021, allow smaller-scale events to take place in urban centres, suburban areas and rural towns in order to stimulate the night economy and provide income for the many artists, workers and traders currently out of pocket from a summer of no festivals. This would encourage the domestic arts and cultural industries in a time where there is huge uncertainty and restrictions applied to travelling abroad and for foreign artists to visit and play.

Young people involved in the creative live industries should be encouraged, accommodated and supported in putting on domestic events.

Allow for temporary use of buildings and public spaces for events including pubs, community halls, car parks, unused warehouses by implementing a temporary event licence, as is the case in England and Wales with the Temporary Events Notice (TEN). Designated districts for cultural and entertainment use in development plans in consultation with local residents and venues alike. An example is zoning for nightlife on the outskirts of a city, away from residential areas.

Establish multi-use buildings in planning classifications and facilitate the fast-tracking of industrial and commercial buildings for multi-use purposes allowing markets, cafes, pop-up shops, event space, co-working, studios and more to operate together from one space to alleviate rent costs and entrepreneurial risk.

Allow cultural institutions and artist centres to be used more often and with greater accessibility to allow for various types of events as part of the night-life economy. Develop Culture Night so it could have a more regular programme, as opposed to being one night in the year to facilitate the mixing of age groups at night-time events.

Podcast Special: Give Us The Night – The future of Irish nightlife