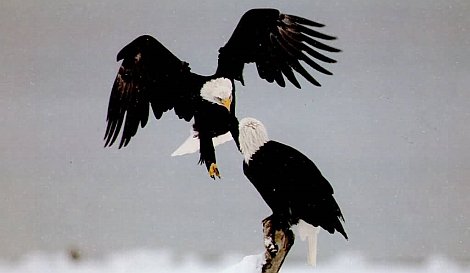 So Daniel Rossum from Grizzly Bear has teamed up with his pal Fred Nicolaus to release an album under the name Department of Eagles. The project actually predates Rossum joining GB and the duo had already released an album in 2003 called The Whitey On The Moon UK LP. Tomorrow, they will release their second album In Ear Park on 4AD, poignantly named after a park which Daniel and his now deceased father used to visit. As you may expect, there are A LOT of similarities with Grizzly Bear in tone but also in quality. In the absence of a GB record until next year, this is absolutely perfect. Listen to the first two tracks from the album (‘No One Does It’ is the most immediate) and watch their debut public performance on Conan last week in the read more.

Department of Eagles – In Ear Park

Department of Eagles – No One Does It Like You

FYI: After searching google images for a picture of an eagle fighting a bear (IT COULD HAPPEN), I stumbled across this piece of Nostradamus related propecy: The Eagle (US) and The Bear (Russia) join forces to fight The Dragon (China). So Grizzly Bear are going to be responsible for World War 3? Shit. Maybe this is why Dan Deacon told me to watch Zeitgeist The Movie. I’m off to listen to In Ear Park in a bunker somewhere.