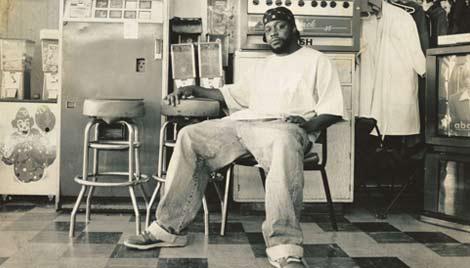 Guilty Simpson has been featured on Stone Throw productions for the last five years and has been a regular on Detroit’s hip-hop circuit for longer than that. After appearances on cuts from J Dilla, Dabrye, Madlib and Percee P, he has finally released a debut entitled Ode to the Ghetto, his showcase album. Guilty is a rapper who focuses on inner-city life with a smattering of male hormones. I’m not entirely convinced by his skills but I am enamoured by the productions on the album from hip-hop beatniks Madlib, Mr. Porter, Oh No, J Dilla, Black Milk, DJ Babu and Konnie Ross. There-in lies the problem, the production far outshines the clichéd rapping, so much so, that you may not even notice how average Guilty is to begin with. After a couple more spins, songs like ‘She Won’t Stay At Home’ starts to grate with its one-dimensional bitch-wrangling and you start to wish Guilty would shut up so you can hear the beats.

Guilty Simpson – I Must Love You (produced by J Dilla)