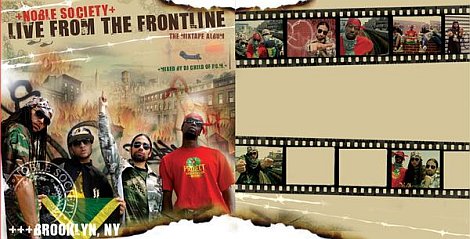 I’ve had this mixtape from Noble Society –Live from the Frontline for ages but I only got around to mentioning it in State this month. It was released in August last year but it’s so good, it’s worth a tardy mention here.

Noble Society are from Brooklyn and blend the products of their various musical heritages together – hip hip, reggae, dancehall into something infused by all these genres but not limited to anything singular. Jah Dan leads proceedings on the mike as a singer, Delie is the man lyricist, Dan Fuego plays beautiful guitar backings and produces while a host of live players are involved.

The mixtape format suits them as they mix up their own tunes with others from 77 Klash, Rankin Scroo and Norris Man. The whole thing is mixed by DJ Child.

Three samples of tunes from the mixtape here: ‘Smile with the Sun Part II’ – a dub reggae workout with a hook, ‘Living the Life’ with Jah Dan rhyming over Turbulence’s ‘Notorious’ (Diplo is fond of this tune as are Radiohead) and ‘Salute’ a Kraftwerk-sampling 77 Klash (pronounced two seven clash) cut.

The best musical interlude in a film…ever