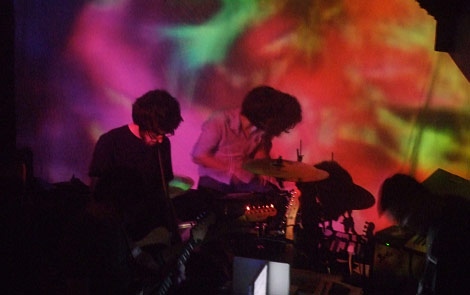 Cormac went to see Halves last night. This is his review.

On a bleak day in July when the horizon was dark, rain poured across the city and thunder clattered in the sky, it was well worth my time to trudge through the traffic and commuter chaos to witness a magnificent performance from Halves in Crawdaddy.

The four piece Dublin based band (occasionally accompanied by a cellist) create brave and inviting soundscapes that rise and fall gracefully through accomplished musicianship and a willingness to bring their sound to interesting places using an array of curious machines. It was last nights performance that really brought Halves to life for me, after their recent EP had roused my curiosity but left me feeling slightly underfed (I found it too short, even for an EP).

The performance was edgy and focused, guitars grinded and drums pounded as hazy vocals permeated the intensity and brought us into periods of mellow sweetness underscored with shimmering electronics and trickling piano. Throughout the show, the members moved between instruments, of which there were many, and played each as intensely as the previous. The stage was draped in visuals that reflected the world from which the music of halves stems, a world of wind farms, desolate landscapes and the psychedelic natural display of the aurora borealis. I’ll be keeping a close eye on Halves, fair play to any band that can spark my imagination on an otherwise dreary Tuesday.