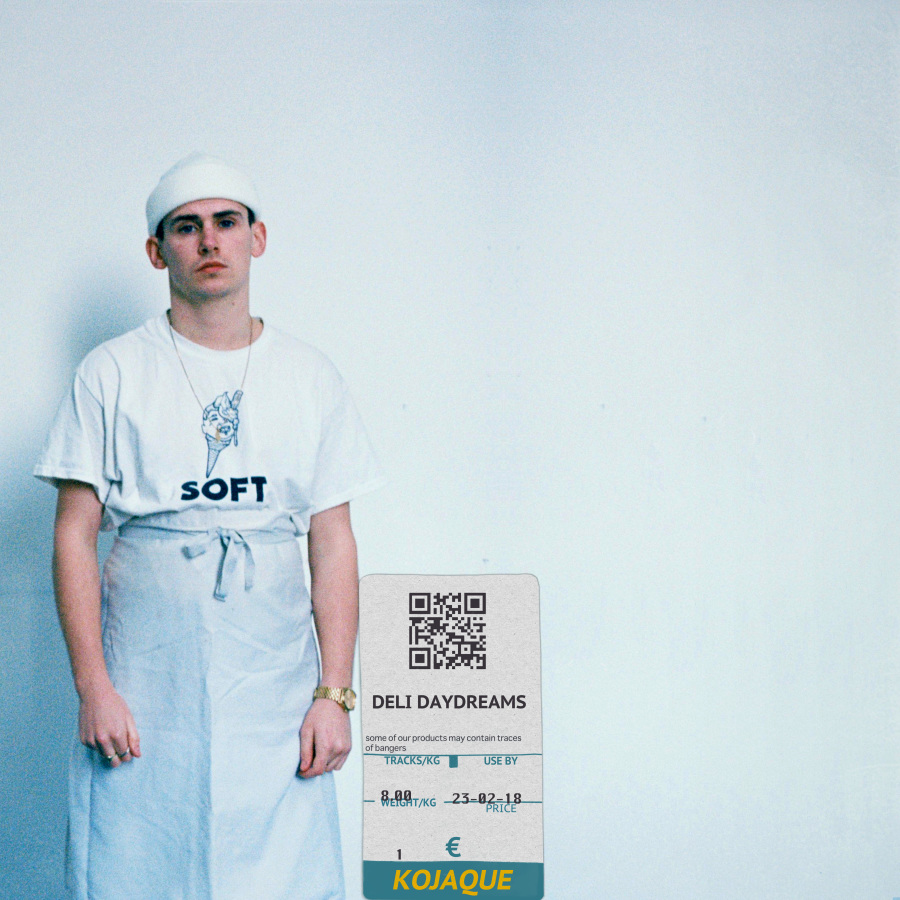 Soft Boy Records’ founder and Dublin rapper/producer Kojaque’s past releases showed flashes of the quality to come. Last year’s single ‘Wificode’ was a brief tongue-in-cheek self-analysis, but it was pointed and energised. The standalone single, and the excellent video, only added to the anticipation for a long form release. The announcement for that long form release came in January of this year and, just a little over a month later, Deli Daydreams was unveiled to the public.

Deli Daydreams doesn’t mess about with its first track ‘White Noise’.  At three minutes and eight seconds long, this blistering intro offers some honest autobiographical lyrics. With minimal instrumental accompaniment, the song feels like an opportunity for the artist to speak his truth. Lines like “Just one more knacker up off the streets, that’s what they say right?” tap into a self-consciousness Kojaque displays throughout the release about how the various people around him might view him, including an omniscient audience.

On Deli Daydreams, Kojaque puts aside false bravado and instead offers a valuable insight into the psyche of the artist, as vulnerable as he is angry.  The album skillfully avoids being overtly conceptual, being originally billed as the chronicle of the deli worker. Instead, Kojaque uses references to his working life in order to reflect how he and others view himself, most notably in ‘Love and Braggadocio’, “See I could love myself I’m just not there yet, they still make me rock a hairnet at the deli in fairness”.  In many ways the underlying theme throughout the album seems to really be that of acceptance, both internal and external.

Deli Daydreams is short and sweet, coming in at just seven full-length songs and one hilarious interlude. Despite this, the album manages to comprehensively tell a story. ‘Last Pint’ dips into the seedier side of Dublin nightlife, spinning a tale of drug abuse and melancholic self-reflection. It’s hard not to make some lyrical comparisons to The Street’s Original Pirate Material. Both Kojaque and Skinner have the innate ability to tap into the cultural environment surrounding them, resulting in something truly relatable to those who’ve been there. From ex drunk-dials to medicinal flat 7-up, Deli Daydreams is the unmistakable product of the city that spawned it.

‘Bubby’s Cream’ sees the artist at his emotional lowest on the album. The subdued percussion and saxophone accompaniment complement the nostalgic overview of a romantic relationship excellently. The emotional range in Deli Daydreams is one of its greatest assets as an album. Kojaque is capable of being the joker, aggressor and self-loather within the space of a couple tracks. In other words, Deli Daydreams is an Irish hip-hop album in which the protagonist is recognisably human, not just a persona.

Unfortunately, the production on the album tends to feel a little flat at times. The excellent vocals, provided by Luka Palm, on ‘Politicksis’ sounds lost in the mix. So too does the pinging-tone on album closer ‘Safest Memory’, which is so out-of-the-box as to hardly be engaging at all. Maybe this is the result of the album’s relatively lo-fi production, or the independent label behind it, but these are minor issues.

These aside, Deli Daydreams is a much-needed injection of quality to the Irish music landscape.

Kojaque plays The Button Factory on the 28th of March. Tickets are priced at €13.56.

Hear the full album on Spotify