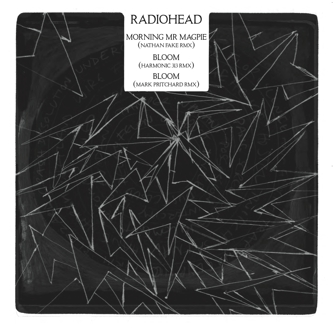 The second of the Radiohead remix 12″ is out today officially worldwide. Nathan Fake goes for the long ambient treatment on ‘Morning Mr. Magpie’ while Mark Pritchard gets two goes at ‘Bloom’, one as Harmonic 313 and my favourite, the second goes for a Suicide-esque robotic industrial drone.

If you don’t get these the first time around, they will be released on CD later in the year. The next vinyl is out in two weeks and features remixes from Lone, Four Tet and Pearson Sound.