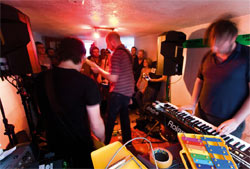 Dylan Haskins of Hideaway House has been granted council funding under the Young Ensembles Scheme to set up an all-ages space in the city centre. Dylan is an ambitious young man who has been running a series of successful live all-ages events in his house in Deansgrange (State did a piece last year on him and the house).

He is looking for people to help make it happen so that the place can be sustainable. Read his full bulletin after the jump.

I recently applied to the Arts Council to open up an All Ages, not-for-profit, Performance/Gig/Artist/Discussion space that would be run by a collective of young people but open to everyone. This would be in the centre of the city, in an area with a lot of pedestrian footfall.

The space would be entirely programmed by the collective. The visual appearance of the space inside and out will be a changing project for some of the young artists with exhibitions on show during gigs etc. My ambition is that it would be open late to provide an alternative space to hang out and do stuff. There’s plenty of places to drink in the city, this would be a non-alcohol space.

The application is partnered with Project Arts Centre so they have offered to handle the bureaucracy end of stuff such as health and safety training, insurance and child protection training (which are all necessary when over 18’s are mixing with under 18’s). They will also be on hand should we need any advice on production stuff.

So I got word today that we’ve been given 18k to start the project off. This would cover rent, utilities, PA purchase, fit-out of the space amongst other things. How long we can keep this going for depends on what rent price is negotiated. My hope is that the project will be hugely successful because Dublin is crying out for a space like this and from our initial success we’ll gain the momentum to get further funding with a view to increasing the level to which we support ourselves. The scheme for the funding is called the Young Ensembles Scheme and it is to support groups or ensembles of young people working on artistic projects. I outlined that space was the main deficit, the creativity was already there. I see this project as bringing a whole bunch of people together from performance, artist and music backgrounds that have not worked together before and will open up new possibilities. This should hopefully be ready to go during the Summer.

So what I need now is to get a collective of people together that are interested in making a space like this happen. We will need a collective that handles bookings and organises stuff. We will also need volunteers to ‘supervise’ (2 at all times). This will be anyone over 18 and all will be given the necessary training (A day or half day). The way I see this working is finding a balance between meeting safety and legal requirements on paper and having a space that does not discriminate on age basis.

I’ve spoken to MacKell about it and Demented would like to do most of their shows here when it is up and running. I hope this is just the beginning of something really important for Dublin.

Email me at [email protected] if you’re interested in being involved.

Saw this via Ian.

Video: David Kitt – No Truth in Your Eyes