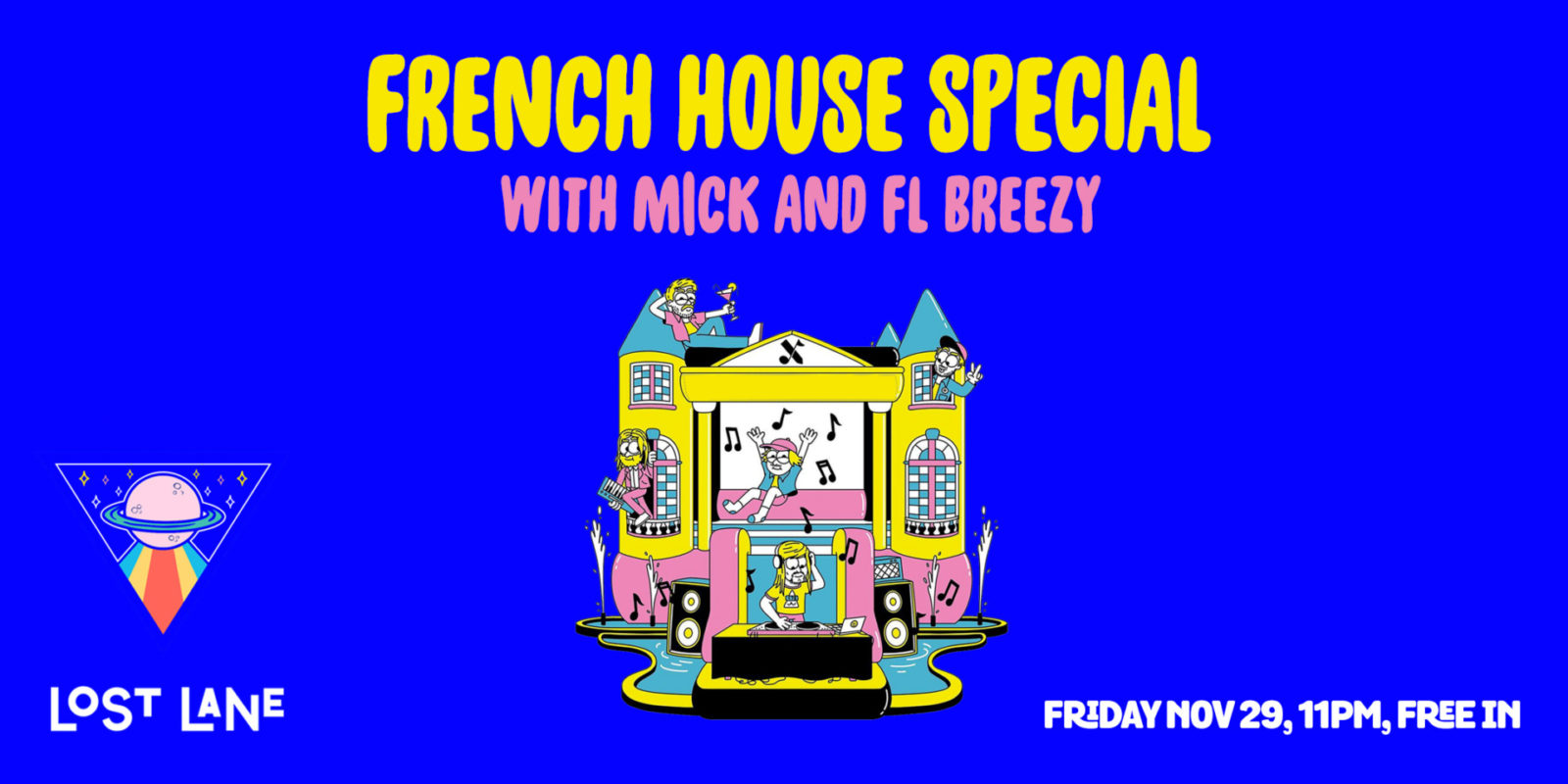 This Friday night at Spacer at Lost Lane from 11pm, M|ck and FL Breezy present a night of French electronic music from its origins and old school house inspirations through to its modern interpretations and everything in between. The night is free in and we asked M|ck and FL to select 10 of their favourites of the subgenre.

Music Sounds Better With You

One-time musical collaborative effort consisting of producers Thomas Bangalter (Daft Punk), Alan Braxe (featured elsewhere in this list), and vocalist Benjamin Diamond. This track is one of the most successful French house tracks of all time and arguably one of the best.

Another crossover hit from the French house scene. While Pete Heller hails from Brighton rather than Paris this definitely has the French touch. Supposedly the track was conceived in 12 hours and you would believe it. It is the simplicity of the track that makes it so infectious and one of the all time greats.

Falling more in to the category of French electro rather than French house, SebastiAn was fresh on the scene when Ed Banger began taking over and molding the new French electronic wave. This track showcases how the new school took the foundations of French house gave it a more aggressive spin.

Thomas Bangalter (Daft Punk) flying solo on this one on his label Roulé which was responsible for countless classic releases. This disco-infused laid back jam sums up what makes French house so great.

Le Knight Club is the brainchild of Eric Chédeville and the other half of Daft Punk, Guy-Manuel de Homem-Christo. The duo operated the legendary label Crydamoure which was pumping out French house hits in the late 90’s and early 00’s, this being one of the best.

Another two superstars of the French house scene, Alan Braxe and Fred Falke team up on this one. While it doesn’t have the same side chained pumping sound that is commonplace in French house, it has a hypnotic drive that can charm any dance floor.

No list of top French House songs would be complete without Cassius – a duo comprising of Philippe Zdar and Hubert Blanc-Francard. The pair were two of the early pioneers of the scene, and their 1999 hit ‘Feeling for You’ is perhaps their most memorable song. Zdar tragically passed away earlier this year following a fall from a high window in Paris, resulting in a huge outpouring of tributes from the dance music community worldwide.

They say you shouldn’t judge a book by its cover, and you certainly shouldn’t judge a song based on its music video – but sometimes they just get it so right. Whether you’re more of a fan of ‘Flat Eric’, our lovable puppet protagonist, or the song’s infectious bassline – there’s no arguing that ‘Flat Beat’ is a classic.

This uplifting groover was released in 2000 by French house duo Modjo, as the lead single on their debut album. The song became an instant classic, topping the charts in multiple countries. 19 years on, it still guarantees an excited reaction from listeners on the radio, TV and dancefloors.

It was hard to pick just one song from ‘Pansoul’, the sole album produced by French duo Motorbass in 1996, but “Flying Fingers” is a personal favourite. ‘Pansoul’ was one of the first projects to come out of the French House scene, and is widely regarded to be one of the most influential. The duo was made up of Philippe Zdar (also of Cassius) and Étienne de Crécy.