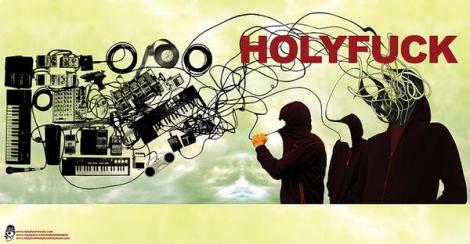 Listening to Holy Fuck can be confusing. It sounds like so much other music you’ve heard but something’s missing. That is because this Toronto band’s ethos is to make electronic-based music without the techniques that laptops could afford them such as looping, backing tracks, programming. They’ll employ all manner of lo-fi instruments to get the sound they want.

Despite their rubbish name and this seemingly limited ethos, they have made an exhilarating album in LP, which is the my standout album of the last month or so. Kicking it off with a recorded live track, you get the impression that Holy Fuck excel more live than on record but that doesn’t stop them coming up with some serious dance grooves.

October’s Podcast tune “Lovely Allen” has been knocking around a while but deserves another mention, due to Final Fantasy’s strings on the track. At times they sound like no other band going, other times they sound like !!!,all free-form and funky. “Royal Gregory” stands out for me as being the closest the album comes to a dance track that could be dropped in a club. Absolutely essential.