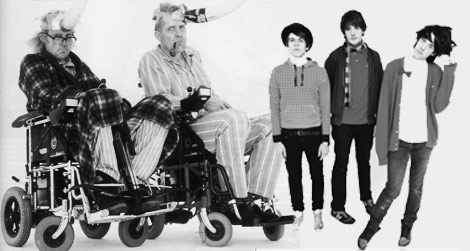 The week ahead, the weekend that was

As The KLF, Bill Drummond and Jimmy Cauty notoriously pulled a lot of artistic and creative stunts on an unsuspecting public and record industry. There was defacement of billboards, cryptic advertisements, manic performances on Top of the Pops, a Brit Awards performance where they fired machine gun blanks into the audience and dumped a dead sheep at the aftershow party, deletion of their entire back catalogue and let’s not forget burning a million quid.

One of the most interesting things the duo did, for me, was writing a book called The Manual: How to Have a Number One the Easy Way in 1988 following the duo’s number one with “Doctorin’ the Tardis” as the Timelords. The book is full of no-bullshit information on how to get yourself to the number one spot in the UK charts. Taking in advice from starting out..

“Firstly, you must be skint and on the dole. Anybody with a proper job or tied up with full time education will not have the time to devote to see it through… Being on the dole gives you a clearer perspective on how much of society is run… having no money sharpens the wits. Forces you never to make the wrong decision. There is no safety net to catch you when you fall…If you are already a musician stop playing your instrument. Even better, sell the junk.”

…to studio booking and appealing to the lowest common denominator..

Gibberish of course, but every lad in the country under a certain age
related instinctively to what it was about. The ones slightly older
needed a couple of pints inside them to clear away the mind debris
left by the passing years before it made sense. As for girls and our
chorus, we think they must have seen it as pure crap. A fact that must
have limited to zero our chances of staying at The Top for more than
one week.”)

.. to finding an irresistible dance floor groove and most importantly, applying the golden rules of pop to your songs…

In this day and age no song with a BPM over 135 will ever have a
chance of getting to Number One. The vast majority of regular club
goers will not be able to dance to it and still look cool. The vast
majority of indie bands, however large their cult following is, who
play what various music journalists often describe as “perfect,
classic pop” will never see the inside of the Top Five for one reason
alone: they perform all their songs above the 135 BPM ceiling. Their
love traumas and balls of confusion of hate and bile all rush by at
some immeasurable blur of a BPM.

It’s a fascinating read. The book is now out of print but is up in its entirety at this KLF site. Recently, Justin from Undersea Community alerted me, to a Philip Sherbune interview with the Klaxons where the band member Jamie Reynolds admitted he took everything he knew from The Manual.

“I literally read that book and put it into practice,” said Reynolds when I talked to him. “I took direct instructions from it, if you like. Get yourself a studio, get a groove going, sing some absolute nonsense over the top, but a breakbeat behind, it and you’re away! That’s what I did! That’s genuinely it. I read that, I noted down the golden rules of pop, and applied that to what we’re doing and made sure that that always applies to everything we do. That way, we always come out with a sort of catchy hit number.” You wonder why more people don’t do it, I said, and he agreed. “This is it! It depends whether or not you want to be a pop band, we said we wanted to be a subversive pop, and for our structure, I’m following the golden rules every step of the way.”

It would explain a lot! Anyway, budding pop number one artists, your time is now.

The week ahead, the weekend that was