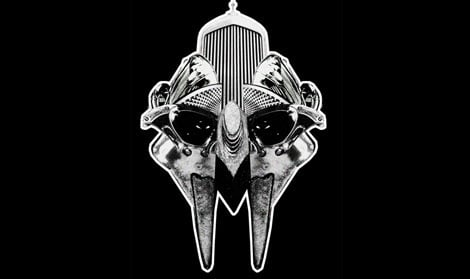 A current rumour going around the interweb, is that hip-hop supervillain MF Doom has been sending an imposter to perform in his place who lip-syncs and only does 20 minute sets. I know Doom is a family man and never leaves the U.S. so it won’t effect me personally, but anyhow, it’s villainous trick on fans and smacks of that Daft Punk rumour last year. Masks can be convenient son.

Full story from a guy that was at one of the shows after the jump:


I’m not sure if MF Doom is your cup of tea or not. But I thought you might be interested to learn that he’s been sending impostors in his place to “perform” (read: lip sync) at some recent shows.
Last week, I was in San Francisco visiting friends, and thought it could be fun to catch the MF Doom show on 8/15 at the Independent. We were ushered in, and given stated instructions from the door man that pictures – even camera phones – were strictly prohibited, and anyone caught taking pictures would be ejected. I know that’s policy at a lot of venues, but I’ve never been verbally warned before. After clenching my teeth through a gawd-awful set from spastic, Slug-derivative Pigeon John, the crowd was treated to about 2 hours of some wack-ass DJ. At some point, an announcement was made, reiterating that absolutely no pictures were allowed at this show, and that violators would be ejected.
Eventually, a bunch of hype men came on stage, while one of the songs off DangerMouse played. Out comes “Doom” looking about 100 pounds lighter than he has ever looked in a picture or video. I’ve never seen him live, however, so I thought that maybe he had just lost a lot of weight. His mic was turned way down low, and you couldn’t hear his voice, and there was no crowd interaction between songs. Just this skinny “Doom”, holding the mic real close to his face, and a bunch of hype men on the sides. 20 minutes later, it was all over. Huh?
I was pissed that I had just witnessed the worst show I’ve seen in my 29 years on this planet. However, it still hadn’t dawned on me that I had just been played, until I heard some kid outside the club wondering if that was really even Daniel Dumile.
A quick look around the intertubes (see below) finds others who claim that this wasn’t the real Doom. Furthermore, it sounds like he had pulled the same stunt a few nights prior at the El Rey in LA. He was a no-show for his Thursday night show in San Francisco, and also missed his Rock the Bells performance in SF.
Clearly, I’m none too happy, although I can see how d-bags like yourself might find it funny. I’ve yet to contact the Independent to see what their story is. But this was certainly something I think is newsworthy. I don’t want others to drop $40 to go see some skinny-ass impostor lip sync Doom songs for 20 minutes like I did.
Here are some links to others (more or less) backing my story: