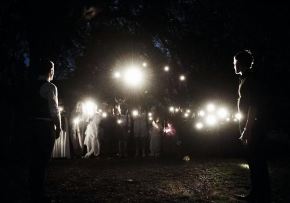 Pitchfork is like the Sauron of music blogs / web reportage. The smug Chicago writers have the all-seeing eye when it comes to new tracks and videos. What inconsiderate pricks they are frequently robbing me and countless others of some semblance of originality by posting a song before almost everyone else on a regular basis so it looks like we’re all feeding on the drip of their mp3 folder.

In the case of Dead Man’s Bones I can’t claim to be the first with it. Not even the first Irish blog to mention Ryan Gosling (yes, actor guy) and Zach Shields’ (another actor guy) new band. But frankly who gives a shit (do any of you?) if the songs are this sky-scraping?

‘My Body’s A Zombie for You’ is Arcade Fire through and through except the Arcade Fire have yet to record an album with a children’s choir and Win Butler is yet to star in a film where he has a relationship with a blowup doll. The self-titled album is out on Anti in October.

MP3: Dead Man’s Bones – My Body’s A Zombie for You