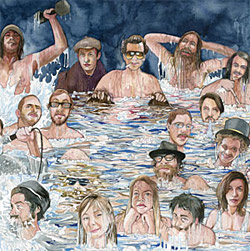 What would Bon Iver sound like if he was involved in group which was directly inspired by 10CC’s ‘I’m Not In Love?’ Wonder no more, as Minneapolis “super-family” Gayngs have made it happen. Started by Ryan Olsen with members of the under-rated Solid Gold, the intention of Gayngs was to produce “a collection of drugged-up keyboards and slick bedroom production” mainly inspired by that soft rock classic.

That remit quickly grew into a project with 25 musicians getting involved including members of Megafaun, The Rosebuds, rapper P.O.S., Leisure Birds, Channy Moon-Casselle and Katy Morley. As a result of the lounge soft-rock aesthetic, each track on the debut album Relayted clocks in at 69BPM. Apparently, Bon Iver does “Bone Thugs & Harmony-style R&B” on the album but in ‘The Gaudy Side of Town’, he settles for smooth, hazy night-time soft soul with Zach Coulter of Solid Gold. Relayted is released physically by Jagjaguwar on 11th May with a pre-order and immediate download available on 20th April.