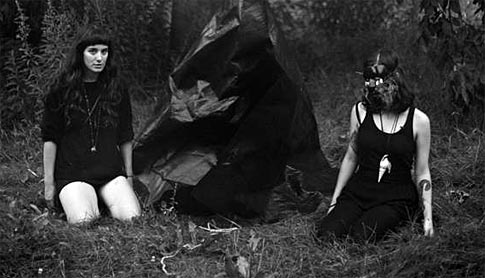 Memory Tapes – ‘Wait In The Dark’

If you thought you recognised the backing singers and dancers in Austra, it might be because they are twins who have their own thing going on too. Formerly called Ghost Bees, Sari and Romy Lightman are gearing up to release their own album as Tasseomancy entitled Ulalume in August on Turf Records. Far away from Austra’s electronic stylings, Tasseomancy is rooted in archaic folk music yet inspired by “eastern song, drone music, phonography and myth.”

Ulalume is their second album and features Timber Timbre on guest vocals on the track ‘The Darkest Of Things’. ‘Soft Feet’ builds from guitar picking and voice as an insistent drone gets louder and louder until the song rises to a foreboding death march. Sample the three tracks from the album and some quality videos too. Ulalume will be released as a limited candle and matchbook set and download.