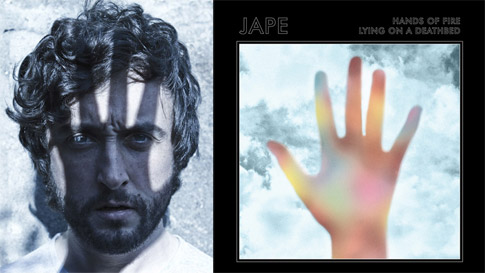 Richie Egan returns to Jape next week with the release of a double A-side single ‘Hands of Fire’/’Lying on a Deathbed’ next Friday May 27th. through new Irish label music/is/for/losers (which appears to count MOTHS and Sun Glitters on its roster). They’ll be the first songs taken from his new album Ocean of Frequency due in September.

“I had thought that the follow up to Ritual was finished about three times so far, but I kept getting drawn back to writing more and more songs, trying to push my songwriting as hard as I could and see how many different styles and moods I could try out, to feel out the album.

Eventually, I realised that you could just keep on doing that forever so I decided it was time to start letting these songs go for a walk around the place. ”

“I have a picture by Egon Schiele hanging on the wall in the studio called, ‘kneeling female in orange-red dress’.
She peers at me all day long with an enigmatic look, sort of peeping out from behind one hand.

I started to think that she could help me writing songs, so I spent a bit of time trying to communicate with her to see what she might offer – she came up with, Hands of Fire.”

Lying on a Deathbed, meanwhile, was recorded at home by Richard Egan and features Conor J. O’Brien from Villagers on drums and electric guitar.

“This song is one long dying breath.”

Here are a couple of older demos to get you in the mood for the new songs:

The Worry Fades by Jape

Jape – ‘Hands Of Fire / Lying On A Deathbed’