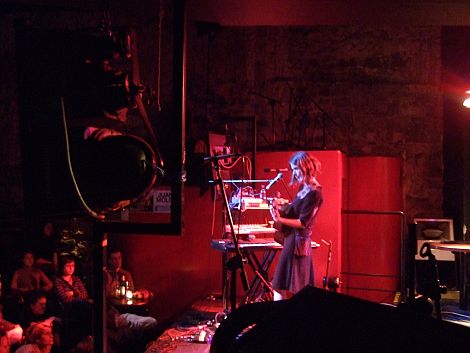 Something about the revered anticipation that greeted Juana Molina as she took the stage in Crawdaddy last night told me this was going to be different from other gigs I’d been to recently. There were also people sitting on the floor in front of the stage as well which is something I’d imagine happens at only Frames gigs. As soon as the Argentinean graced the stage and started the first song on her Spanish guitar, the crowd was won over.

Looking for all the world like a schoolteacher in a dull brown dress ready to teach music class, what we get is a graceful lesson in songwriting which is nothing short of captivating. The real beauty of seeing Molina live after having listened to her records is that you realise just how talented she is. She plays EVERY instrument on every song live, facilitated by a loop station – every percussive tap, beat, synth line, guitar phrase and backing vocal is recorded in real-time and layered on top of each other to produce a full live show, all the while Molina stays composed and inspired, lulling the audience into her serene existence.

The highlights mainly stemmed from the Molina’s ethereal but supple voice as she records various scat-sung backing tracks and continues to pile up to 4 or 5 layers of her voice, perfectly in time and with the ability to sing the next vocal faultlessly. She’s also an excellent guitarist.

During the set, she bemoans that she can’t find the words in English to explain her songs (all sung in Spanish). It doesn’t matter as there’s plenty of beauty in her music to speak for itself. She plays Roisin Dubh, Galway tonight (28th) and Cypress Avenue, Cork tomorrow (29th). Don’t miss.

The case of the Mystery Techno Mix