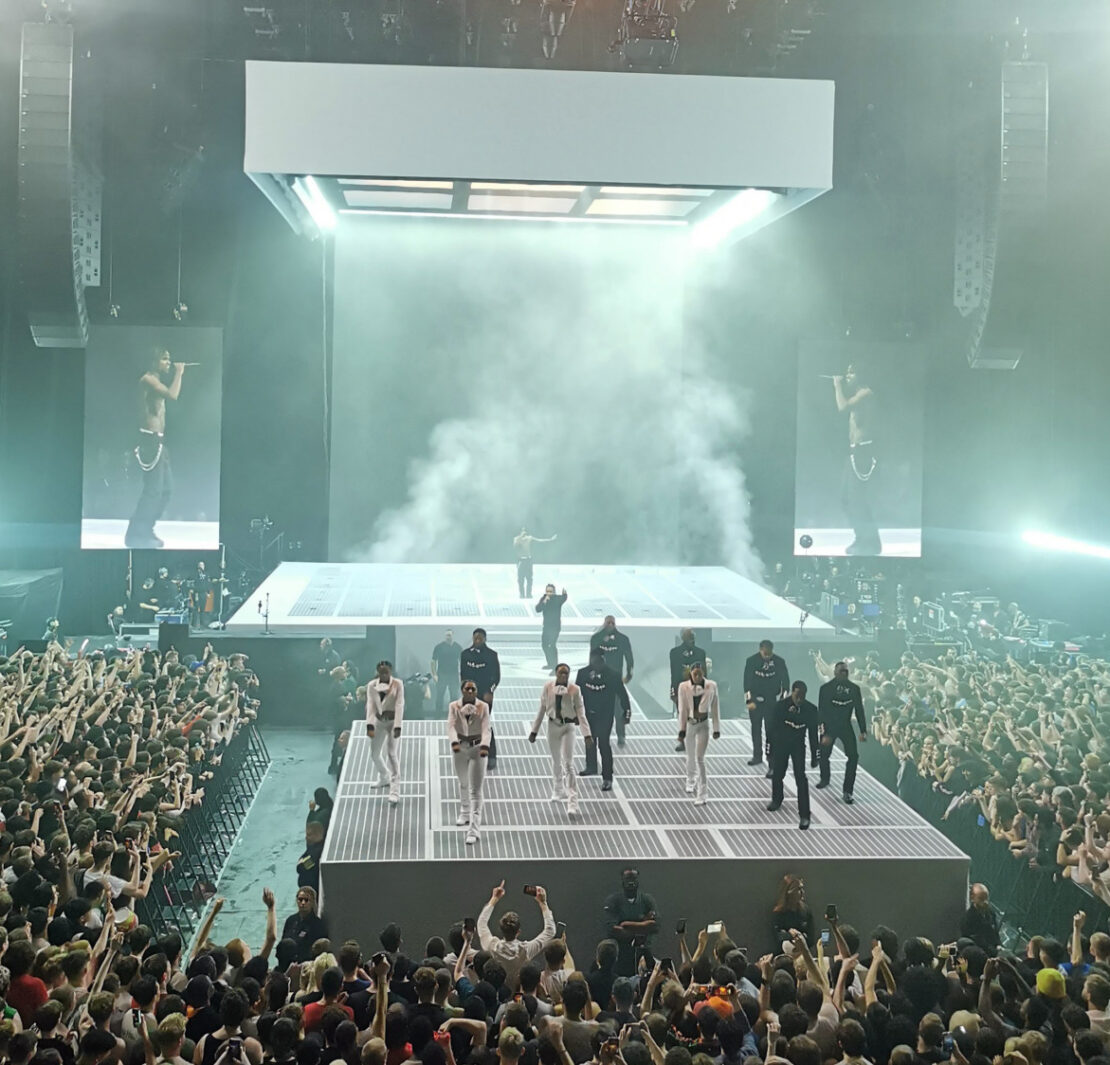 In May, Kendrick Lamar released a dense fifth album, Mr Morale & The Big Steppers, that was informed by the vernacular of therapy, and framed with ideas of the self, ego, black generational trauma and Lamar’s confessions of sex addiction and struggle with the inner self in the face of celebrity.

The Big Steppers Tour, which touched down for night one in Dublin on Sunday night ahead of the second gig this Monday at the 3Arena, was framed with the narrative device of the voice of actor Helen Mirren (replacing the album’s narrator – Kendrick’s wife, Whitney Alford) guiding us and Kendrick and his many aliases through his morality play, which also serves as his album tour show, generously scattered with the majority of his big hits since the release of his second album Good Kid, M.A.A.D City in 2012.

On-stage in Vicar Street in January 2013 following the album breakthrough, Lamar’s show was a foundational MC and DJ set, and for his return to the 3Arena nearly five years since the DAMN tour show, The Big Steppers Tour has a well-rounded sense of occasion to it, from the support slots from Tanna Leone and cousin Baby Keem who both come back for the main event. The latter is already a star on his own, and the support set is a big draw for much of the crowd, unlike most tepid arena supports.

The Big Steppers Tour approaches the production and stage with a vision of a spectacle much greater than most shows muster, with minimal furnishings, a focus of lighting, drapes and a band playing off to the side of stage, not visible to most. There’s a sense of a live experience drawing from theatre and fashion catwalks, a colour palette mostly set in monochrome and grey, occasionally augmented by passages of oranges, blues and reds.

Those who saw the Glastonbury performance earlier this summer will recognise the charged stepping and free movement of the dancers who occasionally blot the stage, which extends into the crowd, but the The Big Steppers Tour is a larger vision, complete with a Kendrick puppet, COVID quarantine performance box, and an attention to lighting detail and booming bass that was overawing in transportive fashion.

Over the course of an hour and 45 minutes or so, the show largely draws its songs from the more introspective recent Mr Morale & The Big Steppers album with regular specks of songs that have become sing-every-world anthems from previous records.

‘DNA’, ‘Alright’, ‘Humble’, ‘m.A.A.d city’, ‘Money Trees’, ‘King Kunta’, ‘Swimming Pools’ and ‘Bitch, Don’t Kill My Vibe’ are all present and delivered in whole, or sometimes in part, while moshpits form in the crowd in anticipation. Kendrick’s long meditative pauses create space for an Irish crowd who know no bounds in repeatedly singing ‘Olé’ and likely confounding the superstar with chants of “Kendrick’s in a box / Kendrick’s in a box / nah nah nah nah /”.

The augmented stage also adds intimacy to Lamar’s performance. He is poised and precise. Kendrick is an artist who knows how to draw big ideas and put them into the pocket of his verses, with a cadence and control that speaks volumes of intent and meaning, and he can convey that with a physical presence on-stage too.

Echoes of the ideas explored on Mr Morale & The Big Steppers are projected onto the large white curtains which often close the stage area off to show elegant real-world versions of shadow puppets – the couple fighting from ‘We Cry Together’ and Lamar’s wounded shadow plunged with arrows while he performs hunched.

A piano, which Kendrick Lamar plays, punctuates the show with opener ‘United In Grief’ and closer ‘Savior’. In between, there’s a dynamic range and energy bursting out from every pore – with ‘N95’, ‘Father Time’, ‘Rich Spirit’, ‘Mr Morale’, ‘Die Hard’ ‘Purple Hearts’ and ‘Worldwide Steppers’ bringing the aforementioned complex themes of inner struggle, morality, a god complex and family bonds.

There’s no room for performances of the album’s two most controversial songs – the theatrical ‘We Cry Together’ (the back and forth fight in the song is used as a setup for a moving rendition of ‘Purple Hearts’) and the dead-naming problematic if well-intentioned ‘Auntie Diaries’, nor is there room for the sprawling and gentle trauma-exploration of ‘Mother I Sober’.

2015’s modern jazz rap classic album To Pimp A Butterfly also suffers from the overarching reliance on the Mr Morale tracks in this set list with only the two hits drawn from it, but this is the The Big Steppers Tour, and something has to give, and it’s a nod to Kendrick’s real family that takes its place.

Cousin Baby Keem comes out for a trio of tracks that include his marquee hit and collaboration with Lamar, ‘Family Ties’, the mask of poise is dropped for a few minutes of old-fashioned rap delivery fun and stage bouncing, it is a highlight of the night, before the return to the alter ego for a final trio of Mr Morale tracks, featuring Tanna Leone on the title track.

Last night’s 29-song spectacle of platforms, plinths, and illustrious rap songs was evidence of Kendrick Lamar as auteur rapper and artist, one who draws his own worlds, and sometimes questionable conclusions, who examines his own psychological id on big stages, who allows only close cohorts on-stage with him (he needs no hypeman), who remains close-lipped when not pouring it into his lyrics.

I had not returned often to Mr Morale & The Big Steppers often since it was released, but writ large in this engaging arena fashion, along with the best songs from Kendrick Lamar’s catalogue, the show produces an intriguing blend of cerebral showmanship that absolutely flourishes on these stages.