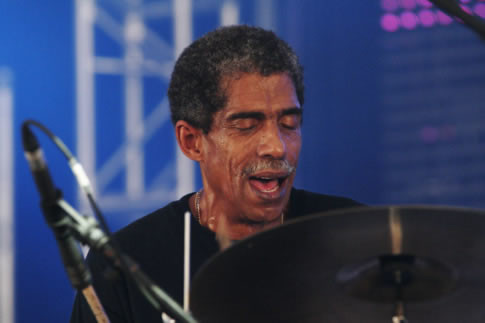 The Spiegeltent is a great venue for the kind of collaboration offered by Kieran Hebden (Four Tet) and Steve Reid. Reid plays spectacular Jazz drumming the likes of which I’d never seen live before. As soon as he took to the stage, he appeared to enter a delirious trance, eyes closed, knowing the position of every drum, cymbal and snare of his kit. Only opening his eyes to signal to Hebden or to give him a confused look when things didn’t go quite to plan. Hebden’s electronics weaved its way around the drumming and when the two understood each other, it was beautiful.

What impresses me about Hebden is not only his ability to construct beautiful samples and instrumentation from his laptop but the way in which these sounds are so inviting and engaging. So it was a pity then that an hour in, when things were getting good and the crowd were getting into it more and more, they stopped. The lights went up and we were herded out of the venue within 10 minutes into 70 mile an hour winds. €20 for an hour? I feel sorry for the numerous people who turned up fashionably late, only to catch five or ten minutes and be thrown out again. The guy who idolises Four Tet standing at the side of the stage hoping to talk to Hebden after missing the whole set, looked crushed. It’s a pity we couldn’t play a supplement to stay around and catch Tony Allen (Fela Kuti’s drummer) and his band but I couldn’t entertain the idea of going outside to pay another €20 to go back in. Did anybody go? Any good?

So my first night at the Fringe Festival didn’t live up to my expectations. Maybe next year.

*Photo is from Flickr from another show. I forgot to bring my camera.