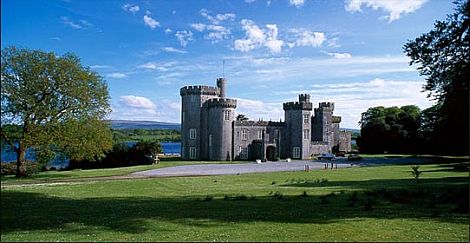 Following the Garden Party, next weekend sees the arrival of Life Festival, the first three day music and camping festival in Ireland this summer. It’s held in Lough Cutra Castle in Gort, Co. Galway from this Friday the 15th to Sunday 17th June.

Despite the overwhelming use of suspect hippie phrases (discovery, harmony, unity, ceremony) and the presence of a psy-trance stage (Possibly the most horrible redundant music in the world. Listen to the three tunes streaming here for examples) there is without a doubt some quality artists playing well worth the trip and possibly the surroundings too.

There is four main stages/tents, two of which I’m interested in:

Includes artists like Phil Hartnoll (Orbital), Will White (one half of Propellerheads), Alex Paterson (The Orb), DMX Krew, Chris Clark, Dublin’s Electric Penguins, Ciaran Byrne (dude sounds so like Boards of Canada it’s unreal), Arveene, Herv (You may have noticed I’m a big fan), Dj Tu-Ki and some Alphabet set heads – Thalamus, T-Woc, Solen and Sarparilla. So loads of 90’s nostalgia mixed with some new stuff which has the potential to be very entertaining.

The other two stages are the aforemented Psy-Trance Neutronyx Stage and the Minimal Zen stage whixh has a load of names I’ve never heard.

Still there’s plenty of quality stuff on there and it could be a nice chilled out weekend. I’m sure the Galway diablo and fire-breathers who don’t make it to the Merrion Sq. Street Performance festival this weekend will be there. I’m looking forward to it. Tickets are €95 (list of retailers here) but are more expensive on the door if available.

Here are some mp3s from some of the artists playing.

Grooverider – On the Double

Check out this Breezeblock from Ed DMX and Ceephax Acid Crew – It’s a winner!