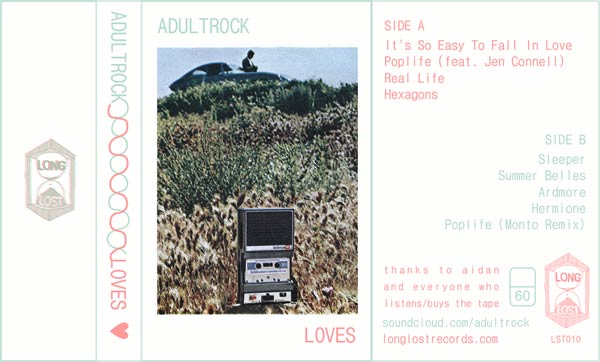 Droopy, drippy, dreamy, hypnagogic, chillwave electronic pop is the aim of Adultrock’s game. After a few years of knocking about releasing original tracks and remixing Adebisi Shank into Jay-Z, Adultrock, the solo project of Gavin Elsted (DOI: Gavin is a good friend of mine) while he’s not otherwise occupied with We Are Losers, sees him don the headphones and get into some laptop song production. The Loves nine-track EP (also featuring a remix from Monto) is the first collection of material gathered together and released as a package. With track titles like ‘Summer Belles’, ‘Sleeper’ and ‘Hexagons’, you can guess the terrain – hazy and bright somnambulist summer music to nod your head along to. Loves is released as a limited cassette on Long Lost Recordson Record Store Day or you can download it for free at Bandcamp or be sound and throw him a few quid for his work.