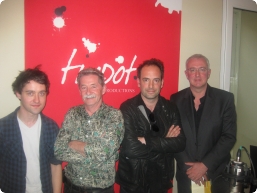 Of interest to Irish folk is the Other Voices radio show presented by OV lynchpin Philip King and writer Joseph O’Connor. The show also features guests Conor O’ Brien of Villagers performing live from recorded live in McCarthy’s Bar, Dingle in 2008 (28:00) as well as in the studio a cover of Bob Dylan’s version of ‘Silver Dagger’. Adrian Crowley drops in too.

Listen to the full show.