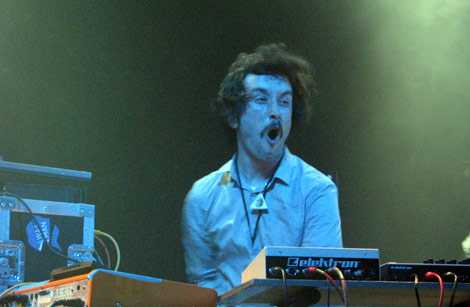 As the Future Days draws to a close, I wonder how successful it was for the promoters? Last night’s Vicar Street show was far from full and people told me there was free tickets being handed out left, right and centre. In fact I have 5 free tickets left for Metronomy tonight if anyone lives near D6W…

In the end, the double header of Dan Deacon and Jape relegated the crowd attendance to a distant memory. It was my third time seeing Dan and I wondered how he would cope with such a large venue. There was no need to worry as the opening Deacon-led warm-up got everybody hyped for what was to follow. The atmosphere became something more closely associated with playground antics than a concert as Dan commanded us to run circles around the venue in a swirling whirlpool of giddy bodies, human-created tunnels which spilled outside the venue and into the halls and back again. Dan played some new songs from his forthcoming album Bromst and sported a pretty impressive Jar Jar Binks t-shirt. 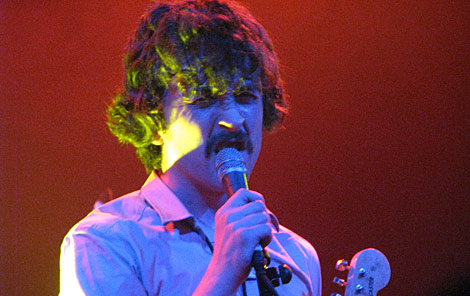 Jape was worried about having to follow such a display of euphoria but in his own way, he succeeded in getting the crowd going with the quality of his tunes rather than theatrics. His just released Ritual album went into number 15 in the Irish charts last week, a nice achievement for one of the soundest blokes and talented musician Ireland has to offer. The new album made up the bulk of the set with the exception of ‘Floating’. ‘I was a Man’ was superb as was ‘Nothing Lasts Forever’ and the finale of ‘Phil Lynott’ had people singing along to the “Look at the fucking Moon” line. Richie even went for a crowd surf. Great stuff. Regarding the rest of the acts on the night: I missed High Places, was unperturbed by White Williams and sporadically interested in Deerhunter. I found a 52mm Canon Lens cap if anyone is missing one. We went to McGruders for Red Rum afterwards and got our collective faces melted by Kid 606 and lasers. Good times.